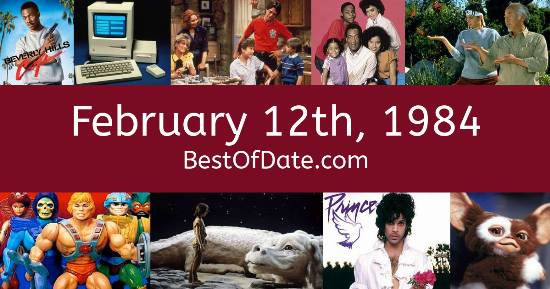 Songs that were on top of the music singles charts in the USA and the United Kingdom on February 12th, 1984.

The date is February 12th, 1984 and it's a Sunday. Anyone born today will have the star sign Aquarius. Currently, people are enjoying their weekend.

Valentine's Day is just around the corner. In America, the song Karma Chameleon by Culture Club is on top of the singles charts. Over in the UK, Relax by Frankie goes to Hollywood is the number one hit song.

Kids and teenagers are watching TV shows such as "Fat Albert and the Cosby Kids", "Diff'rent Strokes", "G.I. Joe: A Real American Hero" and "Alvin and the Chipmunks". Popular toys at the moment include the likes of Lite-Brite, Big Jim (action figure), Water Ring Toss and My Little Pony (figures).

If you are looking for some childhood nostalgia, then check out February 12th, 1990 instead.

Celebrities, historical figures and notable people who were born on the 12th of February.

Ronald Reagan was the President of the United States on February 12th, 1984.

Margaret Thatcher was the Prime Minister of the United Kingdom on February 12th, 1984.

Enter your date of birth below to find out how old you were on February 12th, 1984.

Here are some fun statistics about February 12th, 1984.