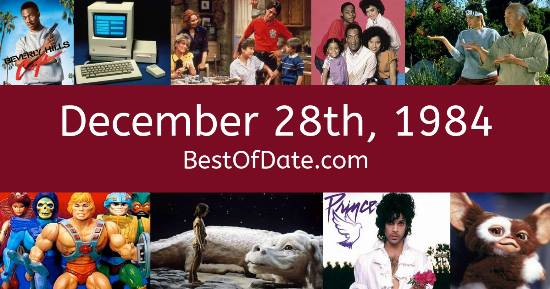 Songs that were on top of the music singles charts in the USA and the United Kingdom on December 28th, 1984.

The date is December 28th, 1984 and it's a Friday. Anyone born today will have the star sign Capricorn. Currently, people have "that Friday feeling" and are looking forward to the weekend.

Christmas Day of 1984 has just passed and many people are relaxing at home and enjoying the holiday season. In America, the song Like A Virgin by Madonna is on top of the singles charts. Over in the UK, Do They Know It's Christmas by Band Aid is the number one hit song.

Ronald Reagan is currently the President of the United States and the movie Beverly Hills Cop is at the top of the Box Office. In the United Kingdom, Margaret Thatcher is the current Prime Minister. Because it's 1984, the radio stations are being dominated by artists such as George Michael, Stevie Wonder, Wham!, Cyndi Lauper and Frankie Goes to Hollywood.

Children and teenagers are currently watching television shows such as "The Bugs Bunny Show", "The Smurfs", "Danger Mouse" and "The Charlie Brown and Snoopy Show". Popular toys at the moment include the likes of Cabbage Patch Kids, Fisher-Price Little People (Farm), Masters of the Universe (figures) and the Commodore 64.

Celebrities, historical figures and notable people who were born on the 28th of December.

Ronald Reagan was the President of the United States on December 28th, 1984.

Margaret Thatcher was the Prime Minister of the United Kingdom on December 28th, 1984.

Enter your date of birth below to find out how old you were on December 28th, 1984.

Here are some fun statistics about December 28th, 1984.

Leave a comment and tell everyone why December 28th, 1984 is important to you.