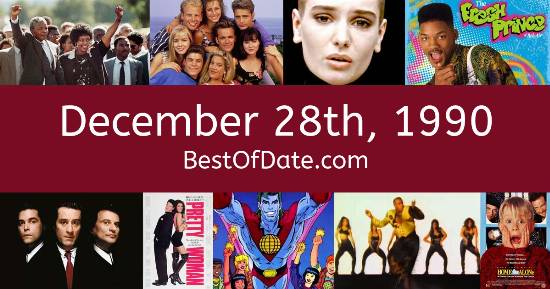 On December 28th, 1990, the following songs were at the top of the music charts in the USA and the UK.

The top "Box Office" movie on this date was the film "Home Alone".

The date is December 28th, 1990, and it's a Friday. Anyone born today will have the star sign Capricorn. Currently, people have "that Friday feeling" and are looking forward to the weekend.

Christmas Day of 1990 has just passed and many people are relaxing at home and enjoying the holiday season. In America, the song Because I Love You by Stevie B is on top of the singles charts. Over in the UK, Saviour's Day by Cliff Richard is the number one hit song.

George W. Bush Snr. is currently the President of the United States, and the movie Home Alone is at the top of the Box Office. In the United Kingdom, John Major is the current Prime Minister. Texting is not a thing yet. Instead, people are using landline phones and pagers. Furthermore, the vast majority of people still have no idea what "the Internet" is.

Iraqi forces are continuing to occupy Kuwait following an invasion at the start of August. The UN Security Council has given Iraq a deadline to withdraw from the country by the 15th of January. If Iraqi forces fail to withdraw on time, "all necessary means" will be used to push them out. In Europe, the Soviet Union is continuing to dissolve. The people of Socialist Slovenia have just voted to become an independent state. In celebrity news, actor Tom Cruise and Nicole Kidman have just been married.

In soccer, German midfielder Lothar Matthäus has been awarded the 1990 Ballon d'Or. The films Godfather III, Edward Scissorhands and Kindergarten Cop are currently being shown in movie theaters. If you were to travel back to this day, notable figures such as John Bardeen, Miles Davis and Freddie Mercury would all be still alive.

Popular toys at the moment include the likes of My Little Pony (figures), Pogo ball / Lolo ball, Koosh Ball and the Sega Genesis / Mega Drive.

These are trending news stories and fads that were prevalent at this time. These are topics that would have been in the media on December 28th, 1990.

Check out our personality summary for people who were born on December 28th, 1990.

If you are looking for some childhood nostalgia, then you should check out December 28th, 1996 instead.

George W. Bush Snr. was the President of the United States on December 28th, 1990.

John Major was the Prime Minister of the United Kingdom on December 28th, 1990.

Enter your date of birth below to find out how old you were on December 28th, 1990.
This information is not transmitted to our server.

Here are some fun statistics about December 28th, 1990.