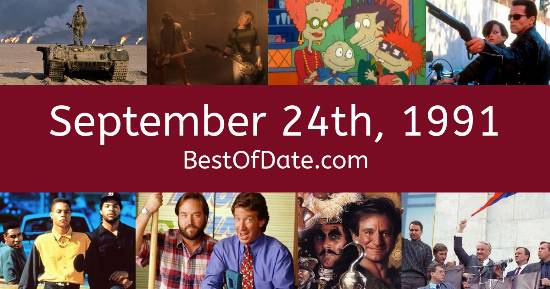 On September 24th, 1991, the following songs were at the top of the music charts in the USA and the UK.

The top "Box Office" movie on this date was the film "Freddy's Dead: The Final Nightmare".

The date is September 24th, 1991, and it's a Tuesday. Anyone born today will have the star sign Libra. Schools and colleges are starting again and Autumn has officially arrived. As a result, temperatures are beginning to cool and trees are starting to shed their leaves.

George W. Bush Snr. is currently the President of the United States, and the movie Freddy's Dead: The Final Nightmare is at the top of the Box Office. In the United Kingdom, John Major is the current Prime Minister. Texting is not a thing yet. Instead, people are using landline phones and pagers. Furthermore, the vast majority of people still have no idea what "the Internet" is.

A rock subgenre called "Grunge" is starting to rise in popularity. In Europe, the Soviet Union is continuing to dissolve. Rock band Guns N' Roses have just released their albums "Use Your Illusion I" and "Use Your Illusion II". Meanwhile, a new sitcom called "Home Improvement", starring Tim Allen, has just been aired for the first time. A new operating system call Linux has been released on the Internet.

In the Alps, a naturally-preserved mummy called "Otzi the Iceman" has just been discovered by two German tourists. In Iraq, a possible disarmament crisis is brewing. IAEA inspectors are currently being prevented from leaving a facility with files detailing Iraq's nuclear weapons program. In California, the Huntington Library has just made the Dead Sea Scrolls available to the public for the first time.

RAF pilot Jackie Mann has been released by his Lebanese kidnappers after spending more than two years in captivity. If you were to travel back to this day, notable figures such as Miles Davis, Freddie Mercury, Robert Reed and Anthony Perkins would all be still alive. On TV, people are watching popular shows such as "Last of the Summer Wine", "Sherlock Holmes", "Quantum Leap" and "One Foot in the Grave".

Meanwhile, gamers are playing titles such as "Paperboy", "SimCity", "Sonic the Hedgehog" and "F-Zero". Kids and teenagers are watching TV shows such as "Alvin and the Chipmunks", "Muppet Babies", "Full House" and "Beetlejuice". If you're a kid or a teenager, then you're probably playing with toys such as Transformers, Jenga, Koosh Ball and the Super Nintendo Entertainment System (SNES).

These are trending news stories and fads that were prevalent at this time. These are topics that would have been in the media on September 24th, 1991.

Check out our personality summary for people who were born on September 24th, 1991.

Television shows that people were watching in September, 1991.

Popular video games that people were playing in September of 1991.

If you are looking for some childhood nostalgia, then you should check out September 24th, 1997 instead.

Iranian Supreme Leader. Deceased
Born on September 24th, 1902
He was not alive on this date.

George W. Bush Snr. was the President of the United States on September 24th, 1991.

Enter your date of birth below to find out how old you were on September 24th, 1991.
This information is not transmitted to our server.

Here are some fun statistics about September 24th, 1991.