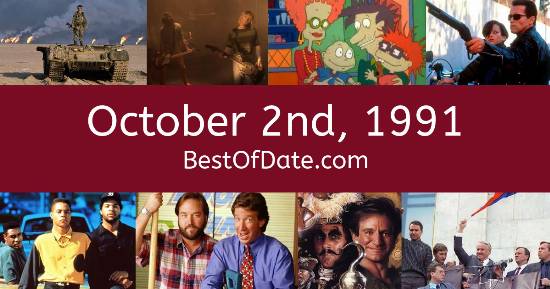 Songs that were on top of the music singles charts in the USA and the United Kingdom on October 2nd, 1991.

The movie "Freddy's Dead: The Final Nightmare" was at the top of the Box Office on October 2nd, 1991.

The date is October 2nd, 1991, and it's a Wednesday. Anyone born today will have the star sign Libra. The summer is long gone. Temperatures have started to become much cooler and the evenings are beginning to get darker.

Fallen leaves have carpeted driveways, lawns, pathways and sidewalks and there's a fresh earthy scent in the ear. In America, the song Good Vibrations by Marky Mark is on top of the singles charts. Over in the UK, (Everything I Do) I Do It For You by Bryan Adams is the number one hit song.

George W. Bush Snr. is currently the President of the United States, and the movie Freddy's Dead: The Final Nightmare is at the top of the Box Office. In the United Kingdom, John Major is the current Prime Minister. Texting is not a thing yet. Instead, people are using landline phones and pagers. Furthermore, the vast majority of people still have no idea what "the Internet" is.

A rock subgenre called "Grunge" is starting to rise in popularity. In Europe, the Soviet Union is continuing to dissolve. In France, Nazi war criminal Klaus Barbie has just died in prison.

Tributes are pouring in for American musician Miles Davis, who has passed away at the age of 65. Davis' doctor has announced that the famous jazz trumpeter died of a stroke, pneumonia and respiratory failure. In Croatia, the Yugoslav Army are currently laying siege to the city of Dubrovnik. If you were to travel back to this day, notable figures such as Freddie Mercury, Robert Reed and Anthony Perkins would all be still alive.

On TV, people are watching popular shows such as "Knots Landing", "Magnum, P.I.", "The Cosby Show" and "Quantum Leap". Meanwhile, gamers are playing titles such as "Duck Hunt", "Railroad Tycoon", "Battletoads" and "F-Zero". Kids and teenagers are watching TV shows such as "Danger Mouse", "Thomas the Tank Engine", "The Wonder Years" and "Count Duckula".

If you're a kid or a teenager, then you're probably playing with toys such as Transformers, Pogo ball / Lolo ball, G.I. Joe (figures) and the SEGA Game Gear.

These are trending news stories and fads that were prevalent at this time. These are topics that would have been in the media on October 2nd, 1991.

Check out our personality summary for people who were born on October 2nd, 1991.

Television shows that people were watching in October, 1991.

Popular video games that people were playing in October of 1991.

If you are looking for some childhood nostalgia, then you should check out October 2nd, 1997 instead.

Soccer player.
Born on October 2nd, 1997
He was born exactly 6 years after this date.

George W. Bush Snr. was the President of the United States on October 2nd, 1991.

John Major was the Prime Minister of the United Kingdom on October 2nd, 1991.

Enter your date of birth below to find out how old you were on October 2nd, 1991.
This information is not transmitted to our server.

Here are some fun statistics about October 2nd, 1991.