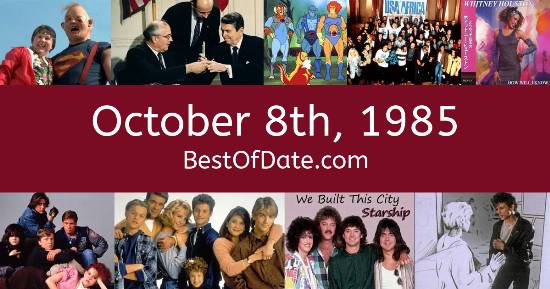 Songs that were on top of the music singles charts in the USA and the United Kingdom on October 8th, 1985.

The date is October 8th, 1985 and it's a Tuesday. Anyone born today will have the star sign Libra. The summer is long gone. Temperatures have started to become much cooler and the evenings are beginning to get darker.

Fallen leaves have carpeted driveways, lawns, pathways and sidewalks and there's a fresh earthy scent in the ear. In America, the song Oh Sheila by Ready for the World is on top of the singles charts. Over in the UK, The Power Of Love by Jennifer Rush is the number one hit song.

Because it's 1985, the radio stations are being dominated by the likes of Tears For Fears, USA For Africa, A-ha, Foreigner, Madonna, Wham! and Phil Collins. If you were to travel back to this day, notable figures such as Paul Castellano, Phil Lynott, Christa McAuliffe and Len Bias would all be still alive. On TV, people are watching popular shows such as "Last of the Summer Wine", "Dallas", "Murder, She Wrote" and "Charles in Charge".

Meanwhile, gamers are playing titles such as "Galaxian", "Pac-Man", "Mario Bros." and "Back to the Future". Children and teenagers are currently watching television shows such as "Voltron", "Muppet Babies", "ThunderCats" and "The Wuzzles". Popular toys at the moment include the likes of Cabbage Patch Kids, Monchhichi / Chicaboo, Sylvanian Families and Teddy Ruxpin.

If you are looking for some childhood nostalgia, then check out October 8th, 1991 instead.

Hungarian model.
Born on October 8th, 1993
She was born exactly 8 years after this date.

Actress.
Born on October 8th, 1997
She was born exactly 12 years after this date.

Ronald Reagan was the President of the United States on October 8th, 1985.

Margaret Thatcher was the Prime Minister of the United Kingdom on October 8th, 1985.

Enter your date of birth below to find out how old you were on October 8th, 1985.

Here are some fun statistics about October 8th, 1985.