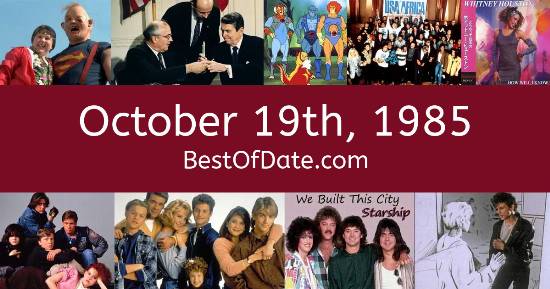 Songs that were on top of the music singles charts in the USA and the United Kingdom on October 19th, 1985:

The date is October 19th, 1985 and it's a Saturday. Anyone born today will have the star sign Libra. Currently, people are enjoying their weekend.

The summer is long gone. Temperatures have started to become much cooler and the evenings are beginning to get darker. Fallen leaves have carpeted driveways, lawns, pathways and sidewalks and there's a fresh earthy scent in the ear. In America, the song Take On Me by A-Ha is on top of the singles charts.

Over in the UK, The Power Of Love by Jennifer Rush is the number one hit song. Ronald Reagan is currently the President of the United States and the movie Commando is at the top of the Box Office. In the United Kingdom, Margaret Thatcher is the current Prime Minister.

In fashion, women are currently wearing long sweaters, fishnet stockings, fingerless gloves, jumpsuits, over-sized scarves, miniskirts, stirrup pants and spandex cycling shorts. Meanwhile, men are wearing Hawaiian shirts, flannel, shell suits and wool sport coats. Because it's 1985, the radio stations are being dominated by the likes of Tears For Fears, USA For Africa, A-ha, Foreigner, Madonna, Wham! and Phil Collins. On TV, people are watching popular shows such as "The Smurfs", "He-Man and the Masters of the Universe", "Punky Brewster" and "Who's the Boss?".

Meanwhile, gamers are playing titles such as "Lunar Lander", "Tetris", "Star Wars: The Empire Strikes Back" and "The Way of the Exploding Fist". Children and teenagers are currently watching television shows such as "Mister Rogers' Neighborhood", "Dungeons & Dragons", "Heathcliff" and "The Care Bears". Popular toys include the likes of "Easy-Bake Oven", "Big Jim (action figure)", "Speak & Spell" and "Transformers".

Who was the Prime Minister of the United Kingdom on October 19th, 1985?

Enter your date of birth below to find out how old you were on October 19th, 1985.

Looking for some nostalgia? Here are some Youtube videos relating to October 19th, 1985. Please note that videos are automatically selected by Youtube and that results may vary! Click on the "Load Next Video" button to view the next video in the search playlist. In many cases, you'll find episodes of old TV shows, documentaries, music videos and soap dramas.

Here are some fun statistics about October 19th, 1985.