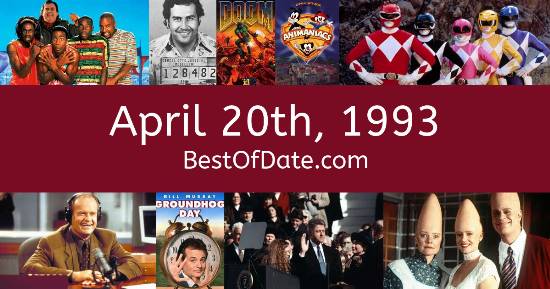 Songs that were on top of the music singles charts in the USA and the United Kingdom on April 20th, 1993.

The date is April 20th, 1993 and it's a Tuesday. Anyone born today will have the star sign Taurus. The summer of 1993 is drawing closer and temperatures have started to rise.

A playing discs game called "Pogs" is currently spreading in popularity throughout the world. It's 1993, so radio stations are being dominated by the likes of Meat Loaf, UB40, Snow, Haddaway, Whitney Houston, Take That, Janet Jackson and Mariah Carey. In celebrity news, "The Cosby Show" actress Lisa Bonet has officially filed for divorce from musician Lenny Kravitz. The couple had been separated since 1991.

A siege between law enforcement and cult members at a compound near Waco, Texas, has ended with the loss of 76 lives. The siege had lasted for over 50 days. Live news footage of the scene showed that one of the buildings caught on fire during an assault by the FBI. In the NFL, quarterback Joe Montana has been traded to the Kansas City Chiefs. If you were to travel back to this day, notable figures such as Conway Twitty, Dražen Petrović, Pat Nixon and Reggie Lewis would all be still alive.

On TV, people are watching popular shows such as "Only Fools and Horses", "Cheers", "Murder, She Wrote" and "Blossom". Meanwhile, gamers are playing titles such as "Street Fighter II: The World Warrior", "Super Mario Kart", "Mortal Kombat" and "Final Fantasy V". Kids and teenagers are watching TV shows such as "Pingu", "Fireman Sam", "Saved by the Bell" and "Taz-Mania".

Popular toys at the moment include the likes of the Game Boy, Yo-yo, G.I. Joe (figures) and Super Soaker (water gun).

If you are looking for some childhood nostalgia, then check out April 20th, 1999 instead.

Bill Clinton was the President of the United States on April 20th, 1993.

John Major was the Prime Minister of the United Kingdom on April 20th, 1993.

Enter your date of birth below to find out how old you were on April 20th, 1993.