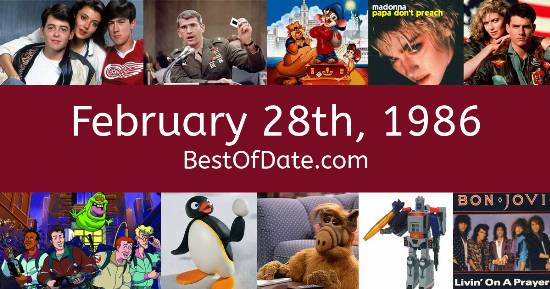 Songs that were on top of the music singles charts in the USA and the United Kingdom on February 28th, 1986.

The movie "Down and Out in Beverly Hills" was at the top of the box office on February 28th, 1986.

The date is February 28th, 1986 and it's a Friday. Anyone born today will have the star sign Pisces. Currently, people have "that Friday feeling" and are looking forward to the weekend.

In America, the song Kyrie by Mr. Mister is on top of the singles charts. Over in the UK, When The Going Gets Tough The Tough Get Going by Billy Ocean is the number one hit song. Ronald Reagan is currently the President of the United States and the movie Down and Out in Beverly Hills is at the top of the Box Office.

If you were to travel back to this day, notable figures such as Len Bias, Cliff Burton, Gia Carangi and Liberace would all be still alive. On TV, people are watching popular shows such as "Trapper John, M.D.", "'Allo 'Allo!", "Scarecrow and Mrs. King" and "Moonlighting". Meanwhile, gamers are playing titles such as "Space Invaders", "Duck Hunt", "Tetris" and "Ultima IV: Quest of the Avatar".

Kids and teenagers are watching TV shows such as "Mister Rogers' Neighborhood", "The Smurfs", "Voltron" and "The Care Bears". If you're a kid or a teenager, then you're probably playing with toys such as Lite-Brite, Snoopy Sno-Cone Machine, Fisher-Price Little People (Farm) and Teddy Ruxpin.

If you are looking for some childhood nostalgia, then check out February 28th, 1992 instead.

Ronald Reagan was the President of the United States on February 28th, 1986.

Margaret Thatcher was the Prime Minister of the United Kingdom on February 28th, 1986.

Enter your date of birth below to find out how old you were on February 28th, 1986.

Here are some fun statistics about February 28th, 1986.