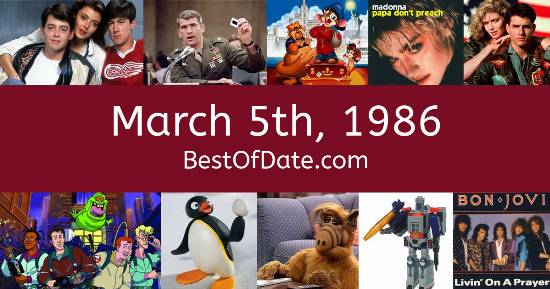 Songs that were on top of the music singles charts in the USA and the United Kingdom on March 5th, 1986:

The date is March 5th, 1986 and it's a Wednesday. Anyone born today will have the star sign Pisces. Spring has started to creep in and the days are beginning to get longer.

In America, the song Kyrie by Mr. Mister is on top of the singles charts. Over in the UK, Chain Reaction by Diana Ross is the number one hit song. Ronald Reagan is currently the President of the United States and the movie Down and Out in Beverly Hills is at the top of the Box Office.

On TV, people are watching popular shows such as "Magnum, P.I.", "Scarecrow and Mrs. King", "The Cosby Show" and "She-Ra: Princess of Power". Meanwhile, gamers are playing titles such as "Pac-Man", "Missile Command", "Back to the Future" and "Super Mario Bros.". Children and teenagers are currently watching television shows such as "Diff'rent Strokes", "The Smurfs", "G.I. Joe: A Real American Hero" and "Muppet Babies".

If you're a kid or a teenager, then you're probably playing with toys such as "Easy-Bake Oven", "Monchhichi / Chicaboo", "My Little Pony (figures)" and "Pogo ball / Lolo ball".

Celebrities, historical figures and noteable people who were born on the 5th of March:

Who was the Prime Minister of the United Kingdom on March 5th, 1986?

Enter your date of birth below to find out how old you were on March 5th, 1986.

Looking for some nostalgia? Here are some Youtube videos relating to March 5th, 1986. Please note that videos are automatically selected by Youtube and that results may vary! Click on the "Load Next Video" button to view the next video in the search playlist. In many cases, you'll find episodes of old TV shows, documentaries, music videos and soap dramas.

Here are some fun statistics about March 5th, 1986.