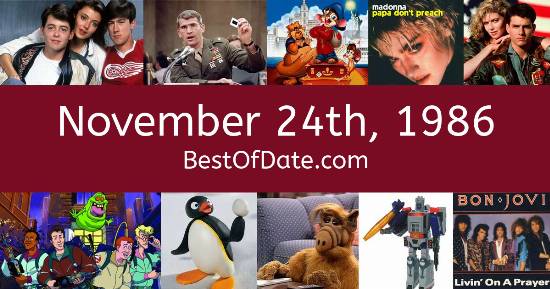 Songs that were on top of the music singles charts in the USA and the United Kingdom on November 24th, 1986:

The date is November 24th, 1986 and it's a Monday. Anyone born today will have the star sign Sagittarius. In America, Thanksgiven Day of 1986 is just around the corner.

It's November, so the evenings are getting darker and the days are getting colder. In America, the song You Give Love A Bad Name by Bon Jovi is on top of the singles charts. Over in the UK, Take My Breath Away by Berlin is the number one hit song.

Because it's 1986, the radio stations are being dominated by the likes of Falco, Madonna, the Pet Shop Boys, Berlin, Whitney Houston, Dionne and Huey Lewis and the News. On TV, people are watching popular shows such as "Last of the Summer Wine", "Family Ties", "The A-Team" and "Charles in Charge". Meanwhile, gamers are playing titles such as "Duck Hunt", "Tetris", "Ultima IV: Quest of the Avatar" and "The Legend of Zelda".

Kids and teenagers are watching TV shows such as "Mister Rogers' Neighborhood", "The Care Bears", "Growing Pains" and "SilverHawks". If you're a kid or a teenager, then you're probably playing with toys such as "Snoopy Sno-Cone Machine", "Monchhichi / Chicaboo", "Transformers" and "Fluppy Dogs".

Celebrities, historical figures and noteable people who were born on the 24th of November:

Who was the Prime Minister of the United Kingdom on November 24th, 1986?

Enter your date of birth below to find out how old you were on November 24th, 1986.

Looking for some nostalgia? Here are some Youtube videos relating to November 24th, 1986. Please note that videos are automatically selected by Youtube and that results may vary! Click on the "Load Next Video" button to view the next video in the search playlist. In many cases, you'll find episodes of old TV shows, documentaries, music videos and soap dramas.

Here are some fun statistics about November 24th, 1986.