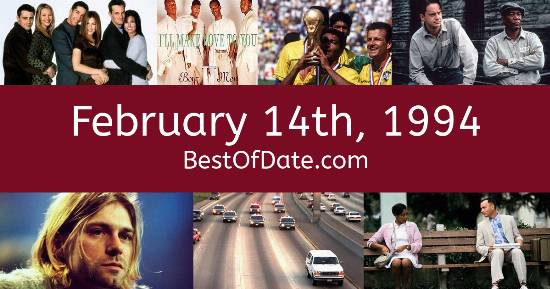 Songs that were on top of the music singles charts in the USA and the United Kingdom on February 14th, 1994:

The date is February 14th, 1994 and it's a Monday. Anyone born today will have the star sign Aquarius. It's Valentine's Day, so couples are exchanging cards and going out to dinner together.

In America, the song The Power Of Love by Celine Dion is on top of the singles charts. Over in the UK, Things Can Only Get Better by D:ream is the number one hit song. Bill Clinton is currently the President of the United States and the movie Ace Ventura: Pet Detective is at the top of the Box Office.

In Europe, a war is continuing to rage on in Bosnia and Herzegovina. Recently, 68 people were killed when the Bosnian Serb Army fired a mortar shell at an open air market place in Sarajevo. The 1994 Winter Olympics are currently taking place in Lillehammer, Norway. On the same day that the games started, Edvard Munch's painting "The Scream" was stolen from the National Gallery in Oslo. People are watching popular TV shows such as "Married... with Children", "Seinfeld", "Dinosaurs" and "Rugrats".

Celebrities, historical figures and noteable people that were born on the 14th of February:

Who was the Prime Minister of the United Kingdom on February 14th, 1994?

Enter your date of birth below to find out how old you were on February 14th, 1994.

Looking for some nostalgia? Here are some Youtube videos relating to February 14th, 1994. Please note that videos are automatically selected by Youtube and that results may vary! Click on the "Load Next Video" button to view the next video in the search playlist. In many cases, you'll find episodes of old TV shows, documentaries, music videos and soap dramas.

Here are some fun statistics about February 14th, 1994.