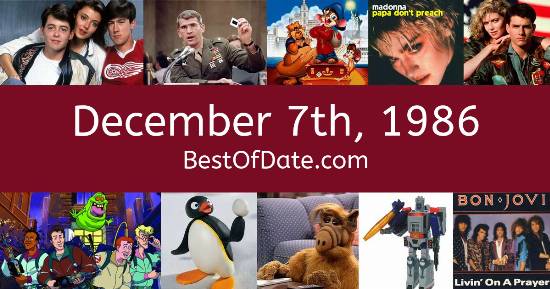 Songs that were on top of the music singles charts in the USA and the United Kingdom on December 7th, 1986.

The date is December 7th, 1986 and it's a Sunday. Anyone born today will have the star sign Sagittarius. Currently, people are enjoying their weekend.

The Christmas season of 1986 has just started. In America, the song The Next Time I Fall by Peter Cetera & Amy Grant is on top of the singles charts. Over in the UK, The Final Countdown by Europe is the number one hit song.

Ronald Reagan is currently the President of the United States and the movie Star Trek IV is at the top of the Box Office. In the United Kingdom, Margaret Thatcher is the current Prime Minister. Because it's 1986, the radio stations are being dominated by the likes of Falco, Madonna, the Pet Shop Boys, Berlin, Whitney Houston, Dionne and Huey Lewis and the News.

Kids and teenagers are watching TV shows such as "Cockleshell Bay", "Danger Mouse", "ThunderCats" and "Growing Pains". Popular toys at the moment include the likes of Dungeons & Dragons, Speak & Spell, Snoopy Sno-Cone Machine and Fluppy Dogs.

If you are looking for some childhood nostalgia, then check out December 7th, 1992 instead.

Singer.
Born on December 7th, 1987
He was born exactly one year after this date.

Ronald Reagan was the President of the United States on December 7th, 1986.

Margaret Thatcher was the Prime Minister of the United Kingdom on December 7th, 1986.

Enter your date of birth below to find out how old you were on December 7th, 1986.

Here are some fun statistics about December 7th, 1986.

Have something to say about December 7th, 1986?