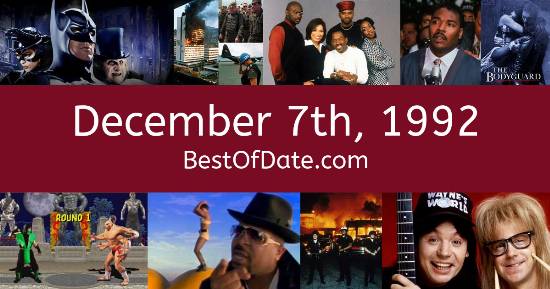 Songs that were on top of the music singles charts in the USA and the United Kingdom on December 7th, 1992:

The date is December 7th, 1992 and it's a Monday. Anyone born today will have the star sign Sagittarius. The Christmas season of 1992 has just started.

In Europe, a war is continuing to rage on in Bosnia and Herzegovina. Disney's "Aladdin" and "The Bodyguard", starring Whitney Houston and Kevin Costner, are both being shown in movie theaters at the moment. US military forces have arrived in Somalia to help guarantee the delivery of humanitarian aid. Over the past few months, the situation in the country has continued to worsen, with factions continuing to splinter into smaller groups. This has made it extremely difficult for the UN to negotiate with faction leaders over food distribution.

On TV, people are watching popular shows such as "Sherlock Holmes", "Teenage Mutant Ninja Turtles", "Family Matters" and "The Fresh Prince of Bel-Air". Meanwhile, gamers are playing titles such as "F-16 Combat Pilot", "Desert Strike ", "Wolfenstein 3D" and "Final Fantasy V". Kids and teenagers are watching TV shows such as "Roseanne", "The Simpsons", "Taz-Mania" and "The Adventures of Tintin".

Popular toys include the likes of "My Little Pony (figures)", "Micro Machines", "Nerf Blaster" and "Talkboy".

Celebrities, historical figures and noteable people who were born on the 7th of December:

Who was the Prime Minister of the United Kingdom on December 7th, 1992?

Enter your date of birth below to find out how old you were on December 7th, 1992.

Looking for some nostalgia? Here are some Youtube videos relating to December 7th, 1992. Please note that videos are automatically selected by Youtube and that results may vary! Click on the "Load Next Video" button to view the next video in the search playlist. In many cases, you'll find episodes of old TV shows, documentaries, music videos and soap dramas.

Here are some fun statistics about December 7th, 1992.