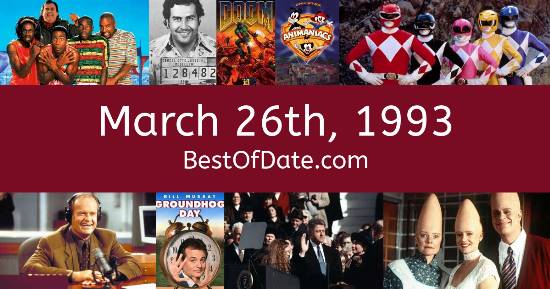 On March 26th, 1993, the following songs were at the top of the music charts in the USA and the UK.

The top "Box Office" movie on this date was the film "Teenage Mutant Ninja Turtles III".

The date is March 26th, 1993, and it's a Friday. Anyone born today will have the star sign Aries. Currently, people have "that Friday feeling" and are looking forward to the weekend.

Spring has arrived and the days have become longer. In America, the song Informer by Snow is on top of the singles charts. Over in the UK, Oh Carolina by Shaggy is the number one hit song.

Bill Clinton is currently the President of the United States, and the movie Teenage Mutant Ninja Turtles III is at the top of the Box Office. In the United Kingdom, John Major is the current Prime Minister. Texting is not a thing yet. Instead, people are using landline phones and pagers. Furthermore, the vast majority of people still have no idea what "the Internet" is.

At a compound in Waco, Texas, a standoff is still ongoing between the FBI and a religious sect called the Branch Davidians. In Ireland, American woman Annie McCarrick has recently gone missing under suspicious circumstances. The New York Times has recently published Kevin Carter's photograph of a starving child being stalked by a vulture in Sudan. There have been strong reactions to the image and a lot of people are currently donating money to humanitarian organizations.

If you were to travel back to this day, notable figures such as Brandon Lee, Conway Twitty, Dražen Petrović and Pat Nixon would all be still alive. On TV, people are watching popular shows such as "Married... with Children", "Roseanne", "Dr. Quinn, Medicine Woman" and "Beavis and Butt-Head". Meanwhile, gamers are playing titles such as "Paperboy", "Yoshi", "Mortal Kombat" and "Star Fox".

Children and teenagers are currently watching television shows such as "Art Attack", "Rugrats", "Home Improvement" and "Goof Troop". If you're a kid or a teenager, then you're probably playing with toys such as the Easy-Bake Oven, the Sega Genesis / Mega Drive, Littlest Pet Shop and the Talkboy.

These are trending news stories and fads that were prevalent at this time. These are topics that would have been in the media on March 26th, 1993.

Check out our personality summary for people who were born on March 26th, 1993.

If you are looking for some childhood nostalgia, then you should check out March 26th, 1999 instead.

Bill Clinton was the President of the United States on March 26th, 1993.

John Major was the Prime Minister of the United Kingdom on March 26th, 1993.

Enter your date of birth below to find out how old you were on March 26th, 1993.
This information is not transmitted to our server.