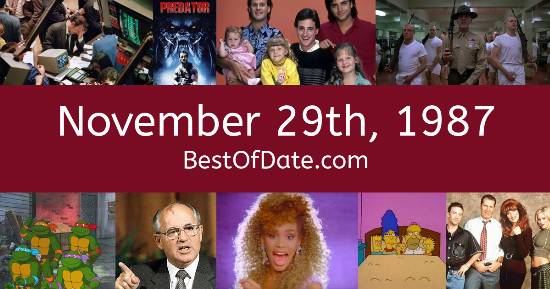 On November 29th, 1987, the following songs were at the top of the music charts in the USA and the UK.

The top "Box Office" movie on this date was the film "The Running Man".

The date is November 29th, 1987, and it's a Sunday. Anyone born today will have the star sign Sagittarius. Currently, people are enjoying their weekend.

In America, Thanksgiven Day and Black Friday have recently come and passed. People are now beginning to look forward to Christmas. It's November, so the evenings are getting darker and the days are getting colder. In America, the song The Time Of My Life by Bill Medley & Jennifer Warnes is on top of the singles charts.

Over in the UK, China In Your Hand by T'Pau is the number one hit song. Ronald Reagan is currently the President of the United States, and the movie The Running Man is at the top of the Box Office. In the United Kingdom, Margaret Thatcher is the current Prime Minister.

If you were to travel back to this day, notable figures such as James Baldwin, Heather O'Rourke, Andy Gibb and Judith Barsi would all be still alive. On TV, people are watching popular shows such as "Columbo", "'Allo 'Allo!", "The Golden Girls" and "My Two Dads". Meanwhile, gamers are playing titles such as "Mario Bros.", "Tetris", "Double Dragon" and "Punch-Out!!".

Kids and teenagers are watching TV shows such as "Adventures of the Gummi Bears", "Pingu", "The Real Ghostbusters" and "21 Jump Street". Popular toys at the moment include the likes of Cabbage Patch Kids, My Little Pony (figures), Sylvanian Families and Micro Machines.

These are trending news stories and fads that were prevalent at this time. These are topics that would have been in the media on November 29th, 1987.

News stories and other events that happened around November 29th, 1987.

Check out our personality summary for people who were born on November 29th, 1987.

Television shows that people were watching in November, 1987.

Popular video games that people were playing in November of 1987.

If you are looking for some childhood nostalgia, then you should check out November 29th, 1993 instead.

Ronald Reagan was the President of the United States on November 29th, 1987.

Find out what your age was on November 29th, 1987, by entering your DOB below.
This information is not saved on our server.

Here are some fun statistics about November 29th, 1987.