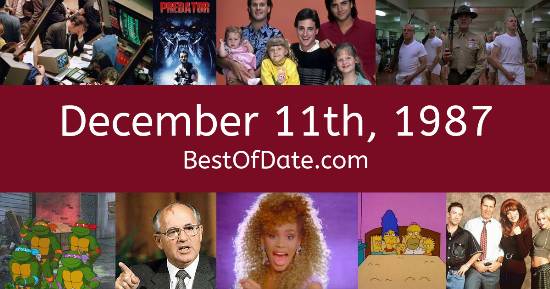 These songs were on top of the music charts in the United States and the United Kingdom on December 11th, 1987.

The movie "Throw Momma From the Train" was at the top of the Box Office on this day.

The date is December 11th, 1987, and it's a Friday. Anyone born today will have the star sign Sagittarius. Currently, people have "that Friday feeling" and are looking forward to the weekend.

The Christmas season of 1987 is in full swing. People are putting up their decorations and festive songs are playing on the radio. In America, the song Faith by George Michael is on top of the singles charts. Over in the UK, China In Your Hand by T'Pau is the number one hit song.

Ronald Reagan is currently the President of the United States, and the movie Throw Momma From the Train is at the top of the Box Office. In the United Kingdom, Margaret Thatcher is the current Prime Minister. In fashion, women are currently wearing sweater dresses, short skirts, small shoulder pads, animal print, long full wool coats and bulky sweaters. Meanwhile, men are wearing tracksuits, sweatshirts, Nike Air Jordan shoes and denim.

Because it's 1987, the radio stations are being dominated by the likes of Los Lobos, Rick Astley, Whitney Houston, the Pet Shop Boys, Bon Jovi, U2 and Madonna. If you were to travel back to this day, notable figures such as Heather O'Rourke, Andy Gibb, Judith Barsi and Roy Orbison would all be still alive. On TV, people are watching popular shows such as "Knots Landing", "Night Court", "Sherlock Holmes" and "Miami Vice".

Meanwhile, gamers are playing titles such as "Mario Bros.", "Duck Hunt", "Ultima IV: Quest of the Avatar" and "Street Fighter". Kids and teenagers are watching TV shows such as "Growing Pains", "The Flintstone Kids", "The Real Ghostbusters" and "Dennis the Menace". If you're a kid or a teenager, then you're probably playing with toys such as Big wheel (tricycle), Fisher-Price Little People (Farm), Pound Puppies and Laser Tag.

These are trending news stories and fads that were prevalent at this time. These are topics that would have been in the media on December 11th, 1987.

News stories and other events that happened around December 11th, 1987.

Check out our personality summary for people who were born on December 11th, 1987.

If you are looking for some childhood nostalgia, then you should check out December 11th, 1993 instead.

Ronald Reagan was the President of the United States on December 11th, 1987.

Margaret Thatcher was the Prime Minister of the United Kingdom on December 11th, 1987.

Find out what your age was on December 11th, 1987, by entering your DOB below.
This information is not saved on our server.

Here are some fun statistics about December 11th, 1987.