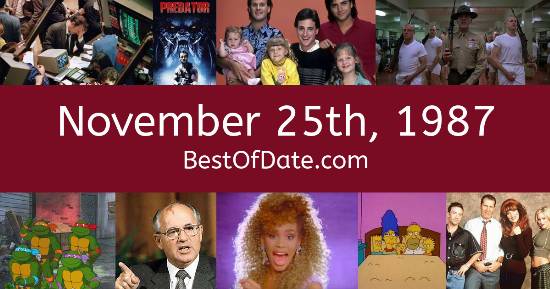 Songs that were on top of the music singles charts in the USA and the United Kingdom on November 25th, 1987.

The date is November 25th, 1987 and it's a Wednesday. Anyone born today will have the star sign Sagittarius. In America, it is the day before Thanksgiven Day and people are looking forward to tomorrow's dinner.

Because it's 1987, the radio stations are being dominated by the likes of Los Lobos, Rick Astley, Whitney Houston, the Pet Shop Boys, Bon Jovi, U2 and Madonna. Actress Demi Moore and actor Bruce Willis have just been married. If you were to travel back to this day, notable figures such as James Baldwin, Heather O'Rourke, Andy Gibb and Judith Barsi would all be still alive.

On TV, people are watching popular shows such as "Magnum, P.I.", "Only Fools and Horses", "The Golden Girls" and "21 Jump Street". Meanwhile, gamers are playing titles such as "Mario Bros.", "Duck Hunt", "Tetris" and "Platoon". Kids and teenagers are watching TV shows such as "The Smurfs", "Alvin and the Chipmunks", "She-Ra: Princess of Power" and "ALF".

Popular toys at the moment include the likes of the Easy-Bake Oven, Operation, Laser Tag and Hot Looks (fashion model dolls).

If you are looking for some childhood nostalgia, then check out November 25th, 1993 instead.

Ronald Reagan was the President of the United States on November 25th, 1987.

Margaret Thatcher was the Prime Minister of the United Kingdom on November 25th, 1987.

Enter your date of birth below to find out how old you were on November 25th, 1987.

Here are some fun statistics about November 25th, 1987.