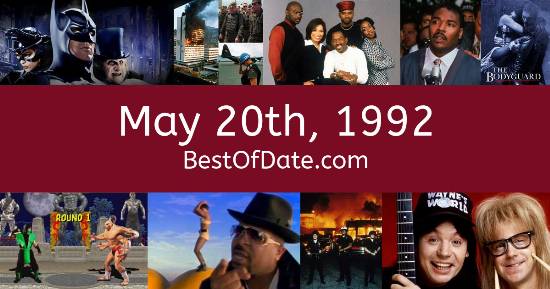 These songs were on top of the music charts in the United States and the United Kingdom on May 20th, 1992.

The date is May 20th, 1992, and it's a Wednesday. Anyone born today will have the star sign Taurus. The summer of 1992 has finally arrived. The weather has warmed up and the evenings are brighter than usual.

The film "Lethal Weapon 3", starring Mel Gibson and Danny Glover, has just been released in movie theaters. In soccer, Spanish side Barcelona have won the European Cup after beating Sampdoria 1-0. A late goal by Dutch player Ronald Koeman in extra time is enough to give the club their first ever European Cup. If you were to travel back to this day, notable figures such as Anthony Perkins, Audrey Hepburn, Thurgood Marshall and Andre the Giant would all be still alive.

If you're a kid or a teenager, then you're probably playing with toys such as Sylvanian Families, the SEGA Game Gear, the Super Nintendo Entertainment System (SNES) and Pogs / Milkcaps.

These are trending news stories and fads that were prevalent at this time. These are topics that would have been in the media on May 20th, 1992.

Check out our personality summary for people who were born on May 20th, 1992.

If you are looking for some childhood nostalgia, then you should check out May 20th, 1998 instead.

Historical weather information for May 20th, 1992.

John Major was the Prime Minister of the United Kingdom on May 20th, 1992.

Enter your date of birth below to find out how old you were on May 20th, 1992.
This information is not transmitted to our server.