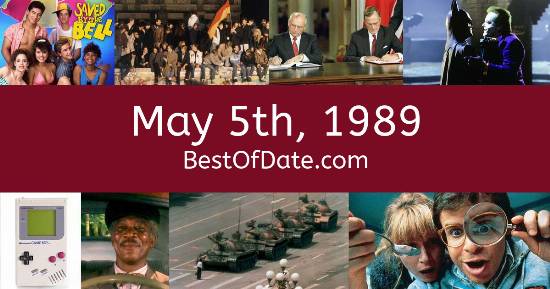 Songs that were on top of the music singles charts in the USA and the United Kingdom on May 5th, 1989.

The date is May 5th, 1989, and it's a Friday. Anyone born today will have the star sign Taurus. Currently, people have "that Friday feeling" and are looking forward to the weekend.

The summer of 1989 has finally arrived. The weather has warmed up and the evenings are brighter than usual. In America, the song Like A Prayer by Madonna is on top of the singles charts. Over in the UK, Eternal Flame by The Bangles is the number one hit song.

On TV, people are watching popular shows such as "Only Fools and Horses", "Sherlock Holmes", "In the Heat of the Night" and "Quantum Leap". Meanwhile, gamers are playing titles such as "Tetris", "Ultima IV: Quest of the Avatar", "Super Mario Bros. 3" and "Super Mario Land". Kids and teenagers are watching TV shows such as "The Bugs Bunny Show", "Alvin and the Chipmunks", "ALF" and "Garfield and Friends".

These are trending news stories and fads that were prevalent at this time. These are topics that would have been in the media on May 5th, 1989.

News stories and other events that happened around May 5th, 1989.

Check out our personality summary for people who were born on May 5th, 1989.

Television shows that people were watching in May, 1989.

Popular video games that people were playing in May of 1989.

If you are looking for some childhood nostalgia, then you should check out May 5th, 1995 instead.

Historical weather information for May 5th, 1989.

Margaret Thatcher was the Prime Minister of the United Kingdom on May 5th, 1989.

Find out what your age was on May 5th, 1989, by entering your DOB below.
This information is not saved on our server.