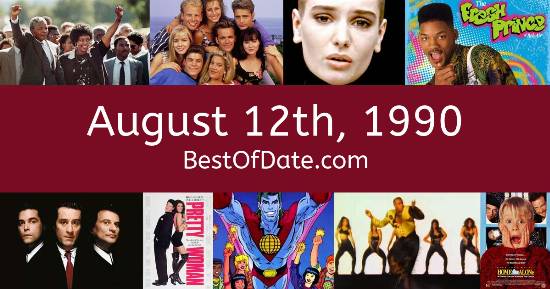 These songs were on top of the music charts in the United States and the United Kingdom on August 12th, 1990.

The movie "Flatliners" was at the top of the Box Office on this day.

The date is August 12th, 1990, and it's a Sunday. Anyone born today will have the star sign Leo. Currently, people are enjoying their weekend.

It's summer, so the temperatures are warmer and the evenings are longer than usual. In America, the song Vision Of Love by Mariah Carey is on top of the singles charts. Over in the UK, Turtle Power by Partners in Kryme is the number one hit song.

George W. Bush Snr. is currently the President of the United States, and the movie Flatliners is at the top of the Box Office. In the United Kingdom, Margaret Thatcher is the current Prime Minister. Texting is not a thing yet. Instead, people are using landline phones and pagers. Furthermore, the vast majority of people still have no idea what "the Internet" is.

In fashion, many of the trends from the late 80s are still popular. Colored tights, denim overalls, leotards, flannel shirts and shoulder pads are all fashionable at the moment. It's 1990, so the airwaves are being dominated by music artists such as Sinéad O'Connor, Paula Abdul, Janet Jackson, Vanilla Ice, Mariah Carey, Stevie B, Madonna and MC Hammer. In the Middle East, Iraqi forces have invaded the neighboring country of Kuwait. The invasion has received widespread condemnation from the international community and the UN Security Council is currently demanding that Saddam Hussein withdraw his forces from the country.

If you were to travel back to this day, notable figures such as Stevie Ray Vaughan, Roald Dahl, John Bardeen and Miles Davis would all be still alive. On TV, people are watching popular shows such as "Last of the Summer Wine", "21 Jump Street", "Full House" and "One Foot in the Grave". Meanwhile, gamers are playing titles such as "Gain Ground", "Super Mario Land", "Batman: The Video Game" and "Phantasy Star II".

Children and teenagers are currently watching television shows such as "Alvin and the Chipmunks", "Adventures of the Gummi Bears", "Beetlejuice" and "Mr. Bean". Popular toys at the moment include the likes of Popples, Micro Machines, Teenage Mutant Hero Turtles figures and the Game Boy.

These are trending news stories and fads that were prevalent at this time. These are topics that would have been in the media on August 12th, 1990.

Check out our personality summary for people who were born on August 12th, 1990.

If you are looking for some childhood nostalgia, then you should check out August 12th, 1996 instead.

English model.
Born on August 12th, 1992
She was born exactly 2 years after this date.

Soccer player.
Born on August 12th, 1999
He was born exactly 9 years after this date.

Social media personality.
Born on August 12th, 2001
She was born exactly 11 years after this date.

George W. Bush Snr. was the President of the United States on August 12th, 1990.

Margaret Thatcher was the Prime Minister of the United Kingdom on August 12th, 1990.

Enter your date of birth below to find out how old you were on August 12th, 1990.
This information is not transmitted to our server.