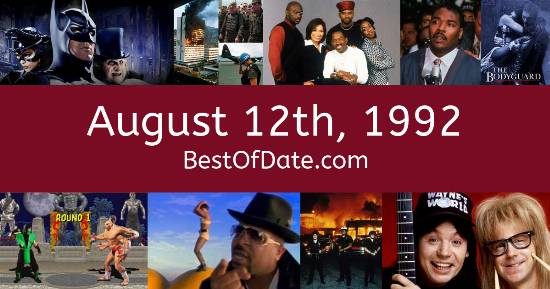 Songs that were on top of the music singles charts in the USA and the United Kingdom on August 12th, 1992.

The date is August 12th, 1992 and it's a Wednesday. Anyone born today will have the star sign Leo. It's summer, so the temperatures are warmer and the evenings are longer than usual.

In America, the song End Of The Road by Boyz II Men is on top of the singles charts. Over in the UK, Rhythm Is A Dancer by Snap is the number one hit song. George W. Bush Snr. is currently the President of the United States and the movie Death Becomes Her is at the top of the Box Office.

Exiled Iranian singer and actor Fereydoun Farrokhzad has been found murdered at his apartment in Bonn, Germany. The killing is widely believed to have been the work of Iran's Islamic government. If you were to travel back to this day, notable figures such as Anthony Perkins, Audrey Hepburn, Thurgood Marshall and Andre the Giant would all be still alive. On TV, people are watching popular shows such as "Cheers", "The Wonder Years", "Saved by the Bell" and "The Fresh Prince of Bel-Air".

Meanwhile, gamers are playing titles such as "Duck Hunt", "Civilization", "Desert Strike " and "Ecco the Dolphin". Kids and teenagers are watching TV shows such as "Thomas the Tank Engine", "Adventures of the Little Koala", "Beverly Hills, 90210" and "Darkwing Duck". If you're a kid or a teenager, then you're probably playing with toys such as My Little Pony (figures), Polly Pocket, Lego Pirates and Yo-yo.

If you are looking for some childhood nostalgia, then check out August 12th, 1998 instead.

Soccer player.
Born on August 12th, 1999
He was born exactly 7 years after this date.

Social media personality.
Born on August 12th, 2001
She was born exactly 9 years after this date.

George W. Bush Snr. was the President of the United States on August 12th, 1992.

John Major was the Prime Minister of the United Kingdom on August 12th, 1992.

Enter your date of birth below to find out how old you were on August 12th, 1992.