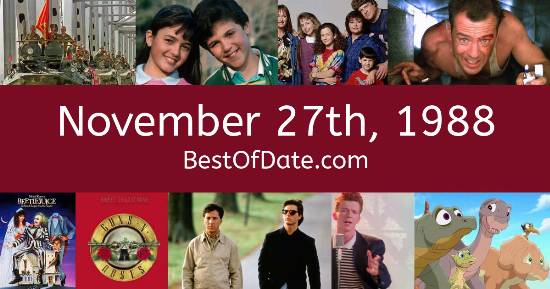 Songs that were on top of the music singles charts in the USA and the United Kingdom on November 27th, 1988.

The date is November 27th, 1988 and it's a Sunday. Anyone born today will have the star sign Sagittarius. Currently, people are enjoying their weekend.

In America, Thanksgiven Day and Black Friday have recently come and passed. People are now beginning to look forward to Christmas. It's November, so the evenings are getting darker and the days are getting colder. In America, the song Bad Medicine by Bon Jovi is on top of the singles charts.

Over in the UK, The First Time by Robin Beck is the number one hit song. Ronald Reagan is currently the President of the United States and the movie Scrooged is at the top of the Box Office. In the United Kingdom, Margaret Thatcher is the current Prime Minister.

On TV, people are watching popular shows such as "Knots Landing", "Charles in Charge", "The Equalizer" and "Full House". Meanwhile, gamers are playing titles such as "Paperboy", "Platoon", "Altered Beast" and "Super Mario Bros. 3". Kids and teenagers are watching TV shows such as "Danger Mouse", "Thomas the Tank Engine", "Growing Pains" and "21 Jump Street".

If you're a kid or a teenager, then you're probably playing with toys such as Water Ring Toss, the Commodore 64, Pogo ball / Lolo ball and Mr Frosty.

If you are looking for some childhood nostalgia, then check out November 27th, 1994 instead.

South Korean rapper.
Born on November 27th, 1992
He was born exactly 4 years after this date.

Ronald Reagan was the President of the United States on November 27th, 1988.

Margaret Thatcher was the Prime Minister of the United Kingdom on November 27th, 1988.

Enter your date of birth below to find out how old you were on November 27th, 1988.

Here are some fun statistics about November 27th, 1988.