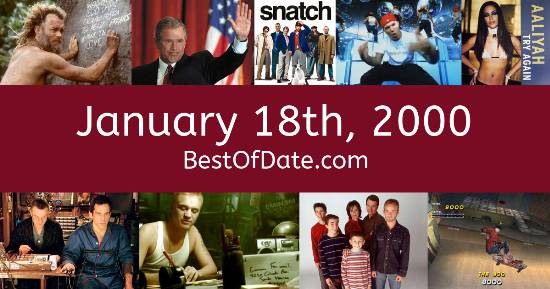 Songs that were on top of the music singles charts in the USA and the United Kingdom on January 18th, 2000.

The date is January 18th, 2000 and it's a Tuesday. Anyone born today will have the star sign Capricorn. In America, the song What A Girl Wants by Christina Aguilera is on top of the singles charts.

Over in the UK, I Have A Dream / Seasons In The Sun by Westlife is the number one hit song. Bill Clinton is currently the President of the United States and the movie Stuart Little is at the top of the Box Office. In the United Kingdom, Tony Blair is the current Prime Minister.

The Nokia 3210 is currently one of the most popular cell phones on the market. Pokemon has become one of the most popular franchises in the world, as trading cards, toys and handheld games gross over one billion dollars. It's the year 2000, so the music charts are being dominated by the likes of Christina Aguilera, Faith Hill, Savage Garden, Destiny's Child, Santana, Sisqó, Creed, Aaliyah and Enrique Iglesias.

On TV, people are watching popular shows such as "Boy Meets World", "Star Trek: Voyager", "Stargate SG-1" and "Sex and the City". Meanwhile, gamers are playing titles such as "Final Fantasy VIII", "Resident Evil 3: Nemesis", "Age of Empires II: The Age of Kings" and "Unreal Tournament". Children and teenagers are currently watching television shows such as "Rugrats", "Sabrina the Teenage Witch", "The Angry Beavers" and "Bear in the Big Blue House".

Bill Clinton was the President of the United States on January 18th, 2000.

Tony Blair was the Prime Minister of the United Kingdom on January 18th, 2000.

Enter your date of birth below to find out how old you were on January 18th, 2000.

Here are some fun statistics about January 18th, 2000.

Leave a comment and tell everyone why January 18th, 2000 is important to you.