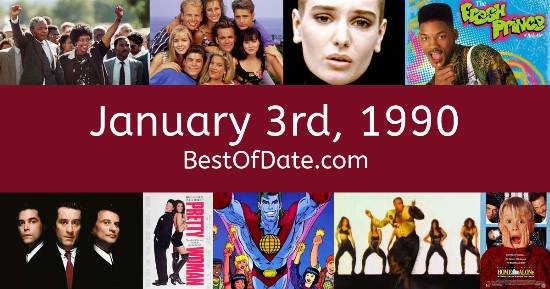 Songs that were on top of the music singles charts in the USA and the United Kingdom on January 3rd, 1990.

The date is January 3rd, 1990 and it's a Wednesday. Anyone born today will have the star sign Capricorn. People are starting to return back to work and school after the Christmas holidays.

A toy called "Polly Pocket" has become the latest craze. It's 1990, so the airwaves are being dominated by music artists such as Sinéad O'Connor, Paula Abdul, Janet Jackson, Vanilla Ice, Mariah Carey, Stevie B, Madonna and MC Hammer. Panamanian leader Manuel Noriega has surrendered himself to US authorities after being on the run.

If you were to travel back to this day, notable figures such as Sammy Davis, Jr, Stevie Ray Vaughan, Roald Dahl and John Bardeen would all be still alive. On TV, people are watching popular shows such as "Knots Landing", "Cheers", "'Allo 'Allo!" and "Roseanne". Meanwhile, gamers are playing titles such as "Duck Hunt", "Gain Ground", "Herzog Zwei" and "Castlevania III: Dracula's Curse".

Kids and teenagers are watching TV shows such as "Growing Pains", "Adventures of the Little Koala", "Full House" and "Noozles". If you're a kid or a teenager, then you're probably playing with toys such as Cabbage Patch Kids, My Little Pony (figures), Jenga and Yo-yo.

If you are looking for some childhood nostalgia, then check out January 3rd, 1996 instead.

South Korean singer.
Born on January 3rd, 1995
She was born exactly 5 years after this date.

Environmental activist.
Born on January 3rd, 2003
She was born exactly 13 years after this date.

George W. Bush Snr. was the President of the United States on January 3rd, 1990.

Margaret Thatcher was the Prime Minister of the United Kingdom on January 3rd, 1990.

Enter your date of birth below to find out how old you were on January 3rd, 1990.

Here are some fun statistics about January 3rd, 1990.