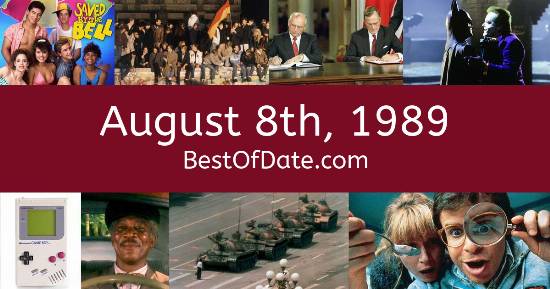 Songs that were on top of the music singles charts in the USA and the United Kingdom on August 8th, 1989.

The date is August 8th, 1989 and it's a Tuesday. Anyone born today will have the star sign Leo. It's summer, so the temperatures are warmer and the evenings are longer than usual.

In America, the song Right Here Waiting by Richard Marx is on top of the singles charts. Over in the UK, Swing The Mood by Jive Bunny & Mastermixers is the number one hit song. George W. Bush Snr. is currently the President of the United States and the movie Turner & Hooch is at the top of the Box Office.

Nintendo has just released a handheld game console called the Game Boy. On TV, people are watching popular shows such as "Murder, She Wrote", "Charles in Charge", "Matlock" and "Roseanne". Meanwhile, gamers are playing titles such as "Duck Hunt", "Gain Ground", "Mega Man 2" and "SimCity".

Children and teenagers are currently watching television shows such as "Muppet Babies", "Married... with Children", "Noozles" and "Hey Dude". If you're a kid or a teenager, then you're probably playing with toys such as Speak & Spell, Transformers, Sylvanian Families and the Game Boy.

George W. Bush Snr. was the President of the United States on August 8th, 1989.

Margaret Thatcher was the Prime Minister of the United Kingdom on August 8th, 1989.

Enter your date of birth below to find out how old you were on August 8th, 1989.

Here are some fun statistics about August 8th, 1989.

Leave a comment and tell everyone why August 8th, 1989 is important to you.