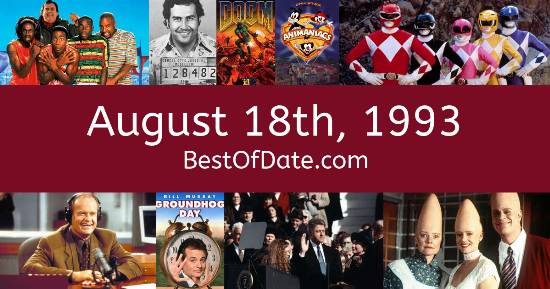 Songs that were on top of the music singles charts in the USA and the United Kingdom on August 18th, 1993.

The date is August 18th, 1993 and it's a Wednesday. Anyone born today will have the star sign Leo. It's summer, so the temperatures are warmer and the evenings are longer than usual.

In America, the song Can't Help Falling In Love by UB40 is on top of the singles charts. Over in the UK, Living On My Own by Freddie Mercury is the number one hit song. Bill Clinton is currently the President of the United States and the movie Rising Sun is at the top of the Box Office.

It's 1993, so radio stations are being dominated by the likes of Meat Loaf, UB40, Snow, Haddaway, Whitney Houston, Take That, Janet Jackson and Mariah Carey. A new thriller called "The Fugitive" has just been released in movie theaters. The movie, which stars Harrison Ford and Tommy Lee Jones, follows the story of a man who has escaped custody after being framed for the murder of his wife. In Thailand, 130 people have tragically lost their lives following the collapse of the Royal Plaza Hotel in Nakhon Ratchasima.

News has recently come to light that the father of NBA star Michael Jordan has been found murdered in South Carolina. The body of 57-year-old James Jordan was discovered earlier this month in a creek. If you were to travel back to this day, notable figures such as Vincent Price, River Phoenix, Frank Zappa and Bill Hicks would all be still alive. On TV, people are watching popular shows such as "Home Improvement", "Step by Step", "Star Trek: Deep Space Nine" and "Beavis and Butt-Head".

Meanwhile, gamers are playing titles such as "The Legend of Zelda: A Link to the Past", "Kirby's Dream Land", "Sonic the Hedgehog 2" and "Mighty Final Fight". Children and teenagers are currently watching television shows such as "Fireman Sam", "In Living Color", "X-Men: The Animated Series" and "The Animals of Farthing Wood". Popular toys at the moment include the likes of Polly Pocket, Yo-yo, the Super Nintendo Entertainment System (SNES) and Mighty Max.

If you are looking for some childhood nostalgia, then check out August 18th, 1999 instead.

Bill Clinton was the President of the United States on August 18th, 1993.

John Major was the Prime Minister of the United Kingdom on August 18th, 1993.

Enter your date of birth below to find out how old you were on August 18th, 1993.