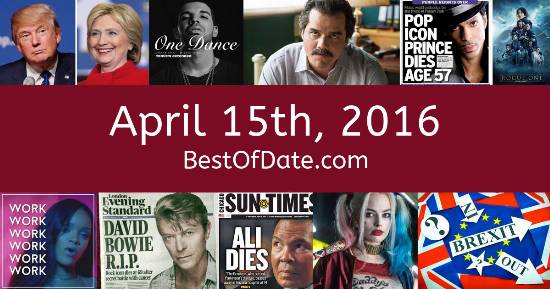 Songs that were on top of the music singles charts in the USA and the United Kingdom on April 15th, 2016.

The date is April 15th, 2016 and it's a Friday. Anyone born today will have the star sign Aries. Currently, people have "that Friday feeling" and are looking forward to the weekend.

Barack Obama is currently the President of the United States and the movie The Boss is at the top of the Box Office. In the United Kingdom, David Cameron is the current Prime Minister. It's 2016, so the music charts are being dominated by artists such as Drake, Lukas Graham, Sia, Mike Posner, The Chainsmokers and Calvin Harris.

If you were to travel back to this day, notable figures such as Chyna, Prince, Muhammad Ali and Kimbo Slice would all be still alive. On TV, people are watching popular shows such as "Game of Thrones", "Homeland", "House of Cards" and "Power". Meanwhile, gamers are playing titles such as "The Sims 4", "Call of Duty: Black Ops III", "Fallout 4" and "XCOM 2".

Kids and teenagers are watching TV shows such as "Horrid Henry", "Jake and the Never Land Pirates", "Agents of S.H.I.E.L.D." and "Bunnicula". If you're a kid or a teenager, then you're probably playing with toys such as the PlayStation 4, the Xbox One, Barbie Saddle n Ride and Star Wars BB-8 toy droid.

Barack Obama was the President of the United States on April 15th, 2016.

David Cameron was the Prime Minister of the United Kingdom on April 15th, 2016.

Enter your date of birth below to find out how old you were on April 15th, 2016.