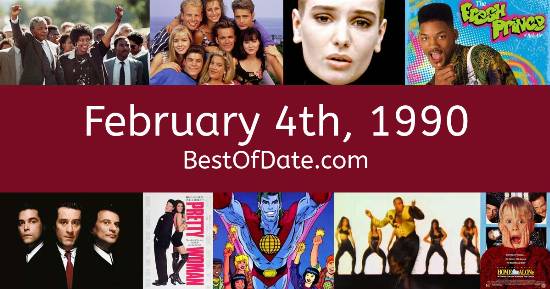 Songs that were on top of the music singles charts in the USA and the United Kingdom on February 4th, 1990.

The movie "Driving Miss Daisy" was at the top of the Box Office on February 4th, 1990.

The date is February 4th, 1990, and it's a Sunday. Anyone born today will have the star sign Aquarius. Currently, people are enjoying their weekend.

In America, the song How Am I Supposed To Live Without You by Michael Bolton is on top of the singles charts. Over in the UK, Nothing Compares 2 U by Sinead O'Connor is the number one hit song. George W. Bush Snr. is currently the President of the United States, and the movie Driving Miss Daisy is at the top of the Box Office.

A toy called "Polly Pocket" has become the latest craze. It's 1990, so the airwaves are being dominated by music artists such as Sinéad O'Connor, Paula Abdul, Janet Jackson, Vanilla Ice, Mariah Carey, Stevie B, Madonna and MC Hammer. In American Football, the San Francisco 49ers have won the Super Bowl after beating the Denver Broncos 55-10 at the Louisiana Superdome.

In celebrity news, Actor Michael Keaton and Caroline McWilliams have just been divorced. The Soviet Union is currently dissolving. Meanwhile, US President George H. W. Bush has just given his first State of the Union address since he became president. In his speech, Bush proposed that the United States and the Soviet Union cut back on their military spending in Europe. The first McDonald's fast-food outlet has just been opened in the Soviet Union.

South African president F. W. de Klerk has announced that the country will be unbanning the African National Congress and releasing political prisoners such as Nelson Mandela. If you were to travel back to this day, notable figures such as Sammy Davis, Jr, Stevie Ray Vaughan, Roald Dahl and John Bardeen would all be still alive. On TV, people are watching popular shows such as "Murder, She Wrote", "My Two Dads", "Seinfeld" and "Family Matters".

Meanwhile, gamers are playing titles such as "SimCity", "DuckTales", "Golden Axe" and "Super Mario World". Children and teenagers are currently watching television shows such as "Danger Mouse", "The Cosby Show", "Adventures of the Little Koala" and "Hey Dude". If you're a kid or a teenager, then you're probably playing with toys such as Transformers, Mr Frosty, Teenage Mutant Hero Turtles figures and the Sega Genesis / Mega Drive.

These are trending news stories and fads that were prevalent at this time. These are topics that would have been in the media on February 4th, 1990.

Check out our personality summary for people who were born on February 4th, 1990.

If you are looking for some childhood nostalgia, then you should check out February 4th, 1996 instead.

Celebrities, historical figures and other notable people who were born on February 4th.

George W. Bush Snr. was the President of the United States on February 4th, 1990.

Margaret Thatcher was the Prime Minister of the United Kingdom on February 4th, 1990.

Enter your date of birth below to find out how old you were on February 4th, 1990.
This information is not transmitted to our server.

Here are some fun statistics about February 4th, 1990.