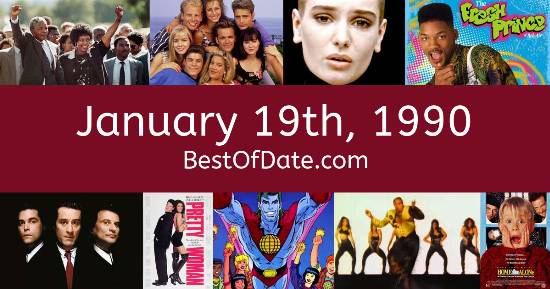 Songs that were on top of the music singles charts in the USA and the United Kingdom on January 19th, 1990.

The date is January 19th, 1990 and it's a Friday. Anyone born today will have the star sign Capricorn. Currently, people have "that Friday feeling" and are looking forward to the weekend.

In America, the song How Am I Supposed To Live Without You by Michael Bolton is on top of the singles charts. Over in the UK, Hangin' Tough by New Kids on the Block is the number one hit song. George W. Bush Snr. is currently the President of the United States and the movie Born on the Fourth of July is at the top of the Box Office.

A toy called "Polly Pocket" has become the latest craze. It's 1990, so the airwaves are being dominated by music artists such as Sinéad O'Connor, Paula Abdul, Janet Jackson, Vanilla Ice, Mariah Carey, Stevie B, Madonna and MC Hammer. In music, Irish singer Sinead O'Connor has just released her song "Nothing Compares 2 U".

Douglas Wilder has just become the first African American to be elected as a governor in the United States. The Soviet Union is continuing to unravel. In Lithuania, 300,000 people have taken to the streets to demonstrate for independence from the Soviet Union. Meanwhile, in Bulgaria, the National Assembly has voted to end one party Communist rule. The Mayor of the District of Columbia, Marion Barry, has recently been arrested for drug possession.

The horror comedy film "Tremors", starring Kevin Bacon, is currently being shown in movie theaters. If you were to travel back to this day, notable figures such as Sammy Davis, Jr, Stevie Ray Vaughan, Roald Dahl and John Bardeen would all be still alive. On TV, people are watching popular shows such as "Sherlock Holmes", "My Two Dads", "Family Matters" and "One Foot in the Grave".

Meanwhile, gamers are playing titles such as "Duck Hunt", "SimCity", "Batman: The Video Game" and "World Cup Italia '90". Kids and teenagers are watching TV shows such as "Muppet Babies", "Pingu", "Full House" and "Noozles". Popular toys at the moment include the likes of Cabbage Patch Kids, Popples, Jenga and the Sega Genesis / Mega Drive.

If you are looking for some childhood nostalgia, then check out January 19th, 1996 instead.

Celebrities, historical figures and other notable people who were born on January 19th.

Rapper. Deceased
Born on January 19th, 1992
He was born exactly 2 years after this date.

Love Island contestant. Deceased
Born on January 19th, 1993
He was born exactly 3 years after this date.

George W. Bush Snr. was the President of the United States on January 19th, 1990.

Margaret Thatcher was the Prime Minister of the United Kingdom on January 19th, 1990.

Enter your date of birth below to find out how old you were on January 19th, 1990.

Here are some fun statistics about January 19th, 1990.