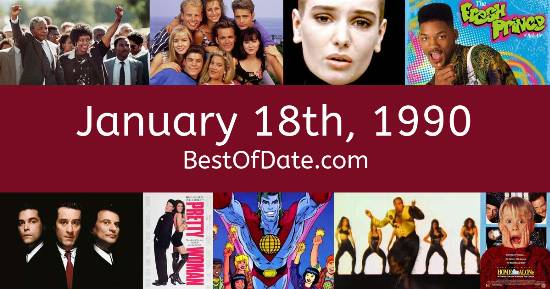 Songs that were on top of the music singles charts in the USA and the United Kingdom on January 18th, 1990.

The date is January 18th, 1990 and it's a Thursday. Anyone born today will have the star sign Capricorn. In America, the song How Am I Supposed To Live Without You by Michael Bolton is on top of the singles charts.

Over in the UK, Hangin' Tough by New Kids on the Block is the number one hit song. George W. Bush Snr. is currently the President of the United States and the movie The War of the Roses is at the top of the Box Office. In the United Kingdom, Margaret Thatcher is the current Prime Minister.

Texting is not a thing yet. Instead, people are using landline phones and pagers. Furthermore, the vast majority of people still have no idea what "the Internet" is. In fashion, many of the trends from the late 80s are still popular. Colored tights, denim overalls, leotards, flannel shirts and shoulder pads are all fashionable at the moment. A toy called "Polly Pocket" has become the latest craze.

It's 1990, so the airwaves are being dominated by music artists such as Sinéad O'Connor, Paula Abdul, Janet Jackson, Vanilla Ice, Mariah Carey, Stevie B, Madonna and MC Hammer. In music, Irish singer Sinead O'Connor has just released her song "Nothing Compares 2 U". Douglas Wilder has just become the first African American to be elected as a governor in the United States.

The Soviet Union is continuing to unravel. In Lithuania, 300,000 people have taken to the streets to demonstrate for independence from the Soviet Union. Meanwhile, in Bulgaria, the National Assembly has voted to end one party Communist rule. The Mayor of the District of Columbia, Marion Barry, has recently been arrested for drug possession. If you were to travel back to this day, notable figures such as Sammy Davis, Jr, Stevie Ray Vaughan, Roald Dahl and John Bardeen would all be still alive.

On TV, people are watching popular shows such as "Only Fools and Horses", "Sherlock Holmes", "Full House" and "Roseanne". Meanwhile, gamers are playing titles such as "Duck Hunt", "RoboCop", "The Revenge of Shinobi" and "Super Mario World". Children and teenagers are currently watching television shows such as "Mister Rogers' Neighborhood", "The Care Bears", "The Real Ghostbusters" and "Mr. Bean".

If you're a kid or a teenager, then you're probably playing with toys such as Sylvanian Families, Teenage Mutant Hero Turtles figures, Lego Pirates and Yo-yo.

If you are looking for some childhood nostalgia, then check out January 18th, 1996 instead.

George W. Bush Snr. was the President of the United States on January 18th, 1990.

Margaret Thatcher was the Prime Minister of the United Kingdom on January 18th, 1990.

Enter your date of birth below to find out how old you were on January 18th, 1990.

Here are some fun statistics about January 18th, 1990.