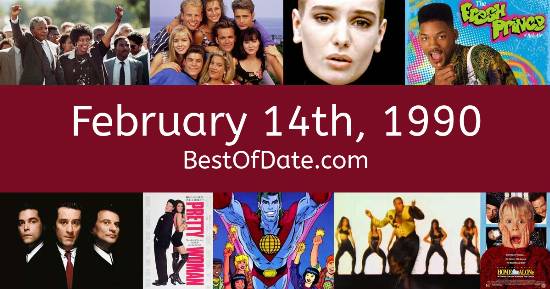 Songs that were on top of the music singles charts in the USA and the United Kingdom on February 14th, 1990.

The date is February 14th, 1990 and it's a Wednesday. Anyone born today will have the star sign Aquarius. It's Valentine's Day, so couples are exchanging cards and going out to dinner together.

In America, the song Opposites Attract by Paula Abdul is on top of the singles charts. Over in the UK, Nothing Compares 2 U by Sinead O'Connor is the number one hit song. George W. Bush Snr. is currently the President of the United States and the movie Hard to Kill is at the top of the Box Office.

It's 1990, so the airwaves are being dominated by music artists such as Sinéad O'Connor, Paula Abdul, Janet Jackson, Vanilla Ice, Mariah Carey, Stevie B, Madonna and MC Hammer. The Communist Party of the Soviet Union has agreed to give up its monopoly on power. Footage of South African activist Nelson Mandela being released from prison after 27 years in captivity is being broadcast around the world.

In boxing, Buster Douglas has just pulled off a shock win over the undefeated "Iron Mike" Tyson. In Europe, an agreement has just been reached to reunify Germany as one country. NASA space probe Voyager 1 has recently sent back a photograph of the earth from 6 billion kilometers away.

Popular toys at the moment include the likes of the Easy-Bake Oven, Popples, Micro Machines and the Sega Genesis / Mega Drive.

If you are looking for some childhood nostalgia, then check out February 14th, 1996 instead.

George W. Bush Snr. was the President of the United States on February 14th, 1990.

Margaret Thatcher was the Prime Minister of the United Kingdom on February 14th, 1990.

Enter your date of birth below to find out how old you were on February 14th, 1990.

Here are some fun statistics about February 14th, 1990.