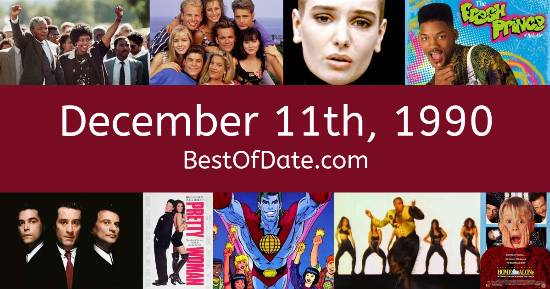 These songs were on top of the music charts in the United States and the United Kingdom on December 11th, 1990.

The date is December 11th, 1990, and it's a Tuesday. Anyone born today will have the star sign Sagittarius. The Christmas season of 1990 is in full swing. People are putting up their decorations and festive songs are playing on the radio.

The fantasy romance film "Edward Scissorhands", starring Johnny Depp and Winona Ryder, is currently being shown in movie theaters. In Europe, the Soviet Union is continuing to dissolve. Recent demonstrations in Albania have forced the Communist government to announce a free national election. Gambino crime family boss John Gotti has just been arrested by the FBI on charges of racketeering and murder.

If you were to travel back to this day, notable figures such as John Bardeen, Miles Davis and Freddie Mercury would all be still alive. On TV, people are watching popular shows such as "Last of the Summer Wine", "Dallas", "Matlock" and "Seinfeld". Meanwhile, gamers are playing titles such as "Duck Hunt", "Super Mario Land", "World Cup Italia '90" and "Castle of Illusion Starring Mickey Mouse".

Kids and teenagers are watching TV shows such as "Growing Pains", "Dink, the Little Dinosaur", "Round the Twist" and "Rosie and Jim". If you're a kid or a teenager, then you're probably playing with toys such as the Easy-Bake Oven, My Little Pony (figures), Transformers and the Game Boy.

These are trending news stories and fads that were prevalent at this time. These are topics that would have been in the media on December 11th, 1990.

News stories and other events that happened around December 11th, 1990.

Check out our personality summary for people who were born on December 11th, 1990.

If you are looking for some childhood nostalgia, then you should check out December 11th, 1996 instead.

George W. Bush Snr. was the President of the United States on December 11th, 1990.

John Major was the Prime Minister of the United Kingdom on December 11th, 1990.

Find out what your age was on December 11th, 1990, by entering your DOB below.
This information is not saved on our server.

Here are some fun statistics about December 11th, 1990.