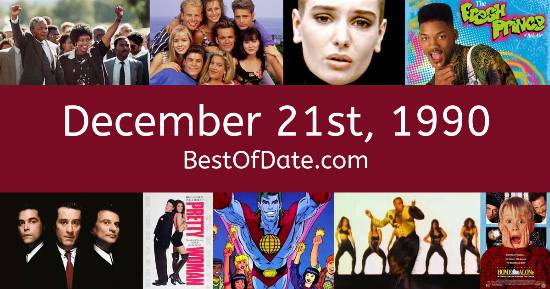 These songs were on top of the music charts in the United States and the United Kingdom on December 21st, 1990.

The date is December 21st, 1990, and it's a Friday. Anyone born today will have the star sign Sagittarius. Currently, people have "that Friday feeling" and are looking forward to the weekend.

Christmas Day of 1990 is fast approaching and the excitement is building. Department stores are thronged with Christmas shoppers. In America, the song Because I Love You by Stevie B is on top of the singles charts. Over in the UK, Ice Ice Baby by Vanilla Ice is the number one hit song.

George W. Bush Snr. is currently the President of the United States, and the movie Child's Play 2 is at the top of the Box Office. In the United Kingdom, John Major is the current Prime Minister. Texting is not a thing yet. Instead, people are using landline phones and pagers. Furthermore, the vast majority of people still have no idea what "the Internet" is.

Iraqi forces are continuing to occupy Kuwait following an invasion at the start of August. The UN Security Council has given Iraq a deadline to withdraw from the country by the 15th of January. If Iraqi forces fail to withdraw on time, "all necessary means" will be used to push them out. In celebrity news, British rock singer Rod Stewart and supermodel Rachel Hunter have been married in Beverly Hills. In Europe, the Soviet Union is continuing to dissolve.

The fantasy romance film "Edward Scissorhands", starring Johnny Depp and Winona Ryder, is currently being shown in movie theaters. Meanwhile, the film "Kindergarten Cop", starring Arnold Schwarzenegger, has also just been released. If you were to travel back to this day, notable figures such as John Bardeen, Miles Davis and Freddie Mercury would all be still alive. On TV, people are watching popular shows such as "'Allo 'Allo!", "In the Heat of the Night", "Seinfeld" and "Family Matters".

Meanwhile, gamers are playing titles such as "Paperboy", "Super Mario Land", "Golden Axe" and "Castlevania III: Dracula's Curse". Kids and teenagers are watching TV shows such as "Danger Mouse", "Pingu", "Beetlejuice" and "Rosie and Jim". If you're a kid or a teenager, then you're probably playing with toys such as the Easy-Bake Oven, Water Ring Toss, My Little Pony (figures) and Popples.

These are trending news stories and fads that were prevalent at this time. These are topics that would have been in the media on December 21st, 1990.

News stories and other events that happened around December 21st, 1990.

Check out our personality summary for people who were born on December 21st, 1990.

If you are looking for some childhood nostalgia, then you should check out December 21st, 1996 instead.

Soccer player.
Born on December 21st, 1996
He was born exactly 6 years after this date.

George W. Bush Snr. was the President of the United States on December 21st, 1990.

John Major was the Prime Minister of the United Kingdom on December 21st, 1990.

Find out what your age was on December 21st, 1990, by entering your DOB below.
This information is not saved on our server.

Here are some fun statistics about December 21st, 1990.