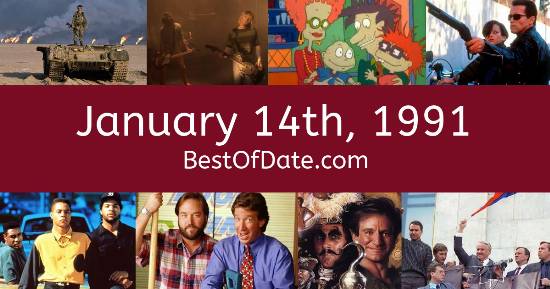 Songs that were on top of the music singles charts in the USA and the United Kingdom on January 14th, 1991:

The date is January 14th, 1991 and it's a Monday. Anyone born today will have the star sign Capricorn. The Christmas holiday season is long over, the decorations have been taken down and a sense of normality has returned.

In America, the song Love Will Never Do by Janet Jackson is on top of the singles charts. Over in the UK, Sadness Part 1 by Enigma is the number one hit song. George W. Bush Snr. is currently the President of the United States and the movie Home Alone is at the top of the Box Office.

In the United Kingdom, John Major is the current Prime Minister. In fashion, many of the trends from the late 80s are still popular. Colored tights, denim overalls, leotards, flannel shirts and shoulder pads are all fashionable at the moment. Iraqi forces are continuing to occupy Kuwait following an invasion at the start of August. The UN Security Council has given Iraq a deadline to withdraw from the country by the 15th of January. If Iraqi forces fail to withdraw on time, "all necessary means" will be used to push them out.

A civil war is currently taking place in the African country of Rwanda. It's 1991, so the airwaves are being dominated by artists such as Bryan Adams, Michael Jackson, Roxette, R.E.M., Color Me Badd and Paula Abdul. In Europe, the Soviet Union is continuing to unravel. Soviet forces have stormed the capital of Lithuania in response to its recent declaration of independence. 14 civilians have been left dead. Meanwhile, in Latvia, a series of confrontations have been taking place between the Latvian government and the pro-Soviet government.

On TV, people are watching popular shows such as "Only Fools and Horses", "Married... with Children", "Quantum Leap" and "Seinfeld". Meanwhile, gamers are playing titles such as "Super Mario Land", "Golden Axe", "Herzog Zwei" and "Castle of Illusion Starring Mickey Mouse". Kids and teenagers are watching TV shows such as "Mister Rogers' Neighborhood", "Married... with Children", "Fireman Sam" and "Noozles".

If you're a kid or a teenager, then you're probably playing with toys such as "Sylvanian Families", "Jenga", "Sega Genesis / Mega Drive" and "Yo-yo".

Celebrities, historical figures and noteable people who were born on the 14th of January:

Who was the Prime Minister of the United Kingdom on January 14th, 1991?

Enter your date of birth below to find out how old you were on January 14th, 1991.

Looking for some nostalgia? Here are some Youtube videos relating to January 14th, 1991. Please note that videos are automatically selected by Youtube and that results may vary! Click on the "Load Next Video" button to view the next video in the search playlist. In many cases, you'll find episodes of old TV shows, documentaries, music videos and soap dramas.

Here are some fun statistics about January 14th, 1991.