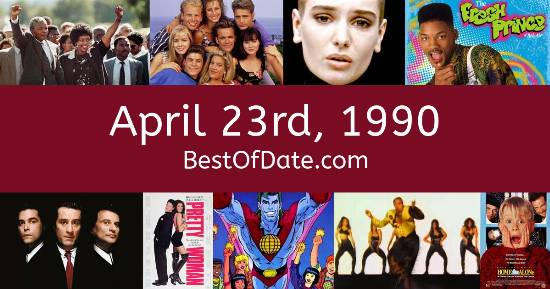 On April 23rd, 1990, the following songs were at the top of the music charts in the USA and the UK.

The date is April 23rd, 1990, and it's a Monday. Anyone born today will have the star sign Taurus. The summer of 1990 is drawing closer and temperatures have started to rise.

It's 1990, so the airwaves are being dominated by music artists such as Sinéad O'Connor, Paula Abdul, Janet Jackson, Vanilla Ice, Mariah Carey, Stevie B, Madonna and MC Hammer. A riot is currently taking place at the Strangeways Prison in Manchester, England. Authorities in Eagan, Minnesota are searching for missing 17-year-old Christopher Kerze, who recently disappeared from his family home.

Former baseball player Pete Rose has just pleaded guilty to two charges of filing false income tax returns. Lebanese kidnappers have released American business professor Robert Polhill after three years of holding him captive. If you were to travel back to this day, notable figures such as Sammy Davis, Jr, Stevie Ray Vaughan, Roald Dahl and John Bardeen would all be still alive.

On TV, people are watching popular shows such as "Dallas", "The Cosby Show", "Married... with Children" and "Full House". Meanwhile, gamers are playing titles such as "DuckTales", "The Revenge of Shinobi", "Herzog Zwei" and "Phantasy Star II". Children and teenagers are currently watching television shows such as "Alvin and the Chipmunks", "Adventures of the Gummi Bears", "Teenage Mutant Ninja Turtles" and "The Simpsons".

If you're a kid or a teenager, then you're probably playing with toys such as Screwball Scramble, My Little Pony (figures), Pogo ball / Lolo ball and Jenga.

These are trending news stories and fads that were prevalent at this time. These are topics that would have been in the media on April 23rd, 1990.

News stories and other events that happened around April 23rd, 1990.

Check out our personality summary for people who were born on April 23rd, 1990.

If you are looking for some childhood nostalgia, then you should check out April 23rd, 1996 instead.

Margaret Thatcher was the Prime Minister of the United Kingdom on April 23rd, 1990.

Find out what your age was on April 23rd, 1990, by entering your DOB below.
This information is not saved on our server.