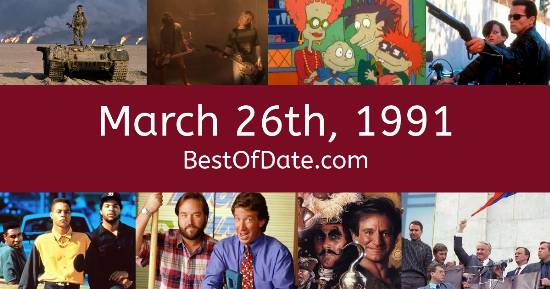 Songs that were on top of the music singles charts in the USA and the United Kingdom on March 26th, 1991.

The date is March 26th, 1991 and it's a Tuesday. Anyone born today will have the star sign Aries. Spring has arrived and the days have become longer.

In America, the song Coming Out Of The Dark by Gloria Estefan is on top of the singles charts. Over in the UK, The One And Only by Chesney Hawkes is the number one hit song. George W. Bush Snr. is currently the President of the United States and the movie Silence of the Lambs is at the top of the Box Office.

It's 1991, so the airwaves are being dominated by artists such as Bryan Adams, Michael Jackson, Roxette, R.E.M., Color Me Badd and Paula Abdul. In the Middle East, Operation Desert storm has recently come to an end after a short ground war between US-led forces and the Iraq military. President Bush has declared that the country of Kuwait has been liberated. Meanwhile, an anti-Saddam uprising has started in the Iraqi city of Basra. In Europe, the Soviet Union is continuing to dissolve.

Pop singer Michael Jackson has just signed a contract with Sony for 1 billion USD dollars. Meanwhile, newspapers are reporting that Eric Clapton's four-year-old son has tragically died after falling out of a New York City apartment window. A new teen sitcom called "Clarissa Explains It All" has just been released on Nickelodeon.

In South Korea, a search is underway for five young boys who recently went missing outside of Daegu. On TV, people are watching popular shows such as "Last of the Summer Wine", "Who's the Boss?", "21 Jump Street" and "Star Trek: The Next Generation". Meanwhile, gamers are playing titles such as "Duck Hunt", "Golden Axe", "Phantasy Star II" and "Railroad Tycoon".

Children and teenagers are currently watching television shows such as "The Cosby Show", "Teenage Mutant Ninja Turtles", "Count Duckula" and "Blossom". Popular toys at the moment include the likes of the Game Boy, the Sega Genesis / Mega Drive, Yo-yo and G.I. Joe (figures).

John Major was the Prime Minister of the United Kingdom on March 26th, 1991.

Enter your date of birth below to find out how old you were on March 26th, 1991.

Leave a comment and tell everyone why March 26th, 1991 is important to you.