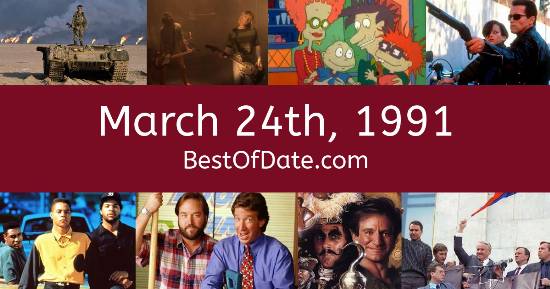 Songs that were on top of the music singles charts in the USA and the United Kingdom on March 24th, 1991.

The date is March 24th, 1991 and it's a Sunday. Anyone born today will have the star sign Aries. Currently, people are enjoying their weekend.

Spring has arrived and the days have become longer. In America, the song One More Try by Timmy T is on top of the singles charts. Over in the UK, The Stonk by Hale & Pace is the number one hit song.

George W. Bush Snr. is currently the President of the United States and the movie Silence of the Lambs is at the top of the Box Office. In the United Kingdom, John Major is the current Prime Minister. In fashion, many of the trends from the late 80s are still popular. Colored tights, denim overalls, leotards, flannel shirts and shoulder pads are all fashionable at the moment.

In Europe, the Soviet Union is continuing to dissolve. Apple CEO Steve Jobs and Laurene Powell have just been married. Pop singer Michael Jackson has just signed a contract with Sony for 1 billion USD dollars.

Meanwhile, newspapers are reporting that Eric Clapton's four-year-old son has tragically died after falling out of a New York City apartment window. A new teen sitcom called "Clarissa Explains It All" has just been released on Nickelodeon. In wrestling, Hulk Hogan has just defeated Sgt. Slaughter at WrestleMania VII.

In Victoria, British Columbia, a search is underway for a 4-year-old Canadian boy called Michael Dunahee, who recently disappeared from a playground at Blanshard Park Elementary School. On TV, people are watching popular shows such as "Last of the Summer Wine", "Magnum, P.I.", "Who's the Boss?" and "Married... with Children". Meanwhile, gamers are playing titles such as "SimCity", "Golden Axe", "Railroad Tycoon" and "Castle of Illusion Starring Mickey Mouse".

Kids and teenagers are watching TV shows such as "Mister Rogers' Neighborhood", "Teenage Mutant Ninja Turtles", "Count Duckula" and "The Fresh Prince of Bel-Air". If you're a kid or a teenager, then you're probably playing with toys such as Sylvanian Families, Micro Machines, the Sega Genesis / Mega Drive and Yo-yo.

If you are looking for some childhood nostalgia, then check out March 24th, 1997 instead.

John Major was the Prime Minister of the United Kingdom on March 24th, 1991.

Enter your date of birth below to find out how old you were on March 24th, 1991.