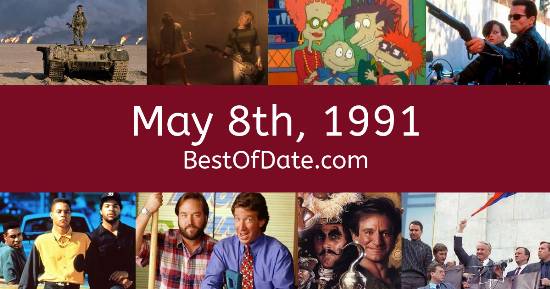 Songs that were on top of the music singles charts in the USA and the United Kingdom on May 8th, 1991:

The date is May 8th, 1991 and it's a Wednesday. Anyone born today will have the star sign Taurus. The summer of 1991 has finally arrived. The weather has warmed up and the evenings are brighter than usual.

In America, the song Joyride by Roxette is on top of the singles charts. Over in the UK, It's In His Kiss by Cher is the number one hit song. George W. Bush Snr. is currently the President of the United States and the movie Oscar is at the top of the Box Office.

It's 1991, so the airwaves are being dominated by artists such as Bryan Adams, Michael Jackson, Roxette, R.E.M., Color Me Badd and Paula Abdul. In Europe, the Soviet Union is continuing to dissolve. A new family sitcom series called "Dinosaurs" has just debuted on ABC.

The final episode of "Dallas" has just been aired on television. The series had been running since 1978. In music news, Sweden have just won the 1991 Eurovision Song Contest with "Fångad av en stormvind" by Carola. The event was hosted in Rome, Italy. In soccer, Arsenal have just won the Football League First Division after a hatrick from Alan Smith helps them secure a 3-1 win over Manchester United.

On TV, people are watching popular shows such as "Sherlock Holmes", "Teenage Mutant Ninja Turtles", "The Fresh Prince of Bel-Air" and "Beverly Hills, 90210". Meanwhile, gamers are playing titles such as "Duck Hunt", "Golden Axe", "Phantasy Star II" and "Castle of Illusion Starring Mickey Mouse". Children and teenagers are currently watching television shows such as "Married... with Children", "The Wonder Years", "Saved by the Bell" and "Rosie and Jim".

Notable events that occurred around May 8th, 1991:

Who was the Prime Minister of the United Kingdom on May 8th, 1991?

Enter your date of birth below to find out how old you were on May 8th, 1991.

Looking for some nostalgia? Here are some Youtube videos relating to May 8th, 1991. Please note that videos are automatically selected by Youtube and that results may vary! Click on the "Load Next Video" button to view the next video in the search playlist. In many cases, you'll find episodes of old TV shows, documentaries, music videos and soap dramas.