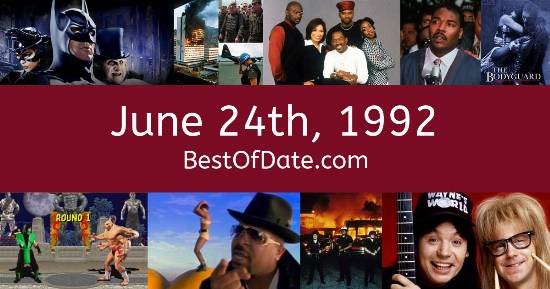 On June 24th, 1992, the following songs were at the top of the music charts in the USA and the UK.

The top "Box Office" movie on this date was the film "Patriot Games".

The date is June 24th, 1992, and it's a Wednesday. Anyone born today will have the star sign Cancer. It's summer, so the temperatures are warmer and the evenings are longer than usual.

In America, the song I'll Be There by Mariah Carey is on top of the singles charts. Over in the UK, ABBA-esque by Erasure is the number one hit song. George W. Bush Snr. is currently the President of the United States, and the movie Patriot Games is at the top of the Box Office.

In Sweden, 1992 UEFA European Football Championship is currently taking place. In the United States, former Secretary of Defense Caspar Weinberger has recently been indicted for his role in covering up the Iran-Contra affair. Tributes are currently pouring in for Australian singer Peter Allen, who has recently passed away from AIDS.

The film "Batman Returns", starring Michael Keaton, has just been released in movie theaters. In Russia, two skeletons that were found in Yekaterinburg have been identified as belonging to Tsar Nicholas II of Russia and Tsarina Alexandra. The pair had been executed in 1917 by Communist revolutionaries. Gambino crime family boss John Gotti has just been sentenced to life in prison.

If you were to travel back to this day, notable figures such as Anthony Perkins, Audrey Hepburn, Thurgood Marshall and Andre the Giant would all be still alive. On TV, people are watching popular shows such as "Last of the Summer Wine", "Star Trek: The Next Generation", "Quantum Leap" and "Baywatch". Meanwhile, gamers are playing titles such as "Duck Hunt", "F-16 Combat Pilot", "The Legend of Zelda: A Link to the Past" and "Yoshi".

Kids and teenagers are watching TV shows such as "The Wonder Years", "Dink, the Little Dinosaur", "Are You Afraid of the Dark?" and "Barney & Friends". If you're a kid or a teenager, then you're probably playing with toys such as the Easy-Bake Oven, Cabbage Patch Kids, Teenage Mutant Hero Turtles figures and Yo-yo.

These are trending news stories and fads that were prevalent at this time. These are topics that would have been in the media on June 24th, 1992.

Check out our personality summary for people who were born on June 24th, 1992.

If you are looking for some childhood nostalgia, then you should check out June 24th, 1998 instead.

Internet personality.
Born on June 24th, 1998
She was born exactly 6 years after this date.

John Major was the Prime Minister of the United Kingdom on June 24th, 1992.

Enter your date of birth below to find out how old you were on June 24th, 1992.
This information is not transmitted to our server.