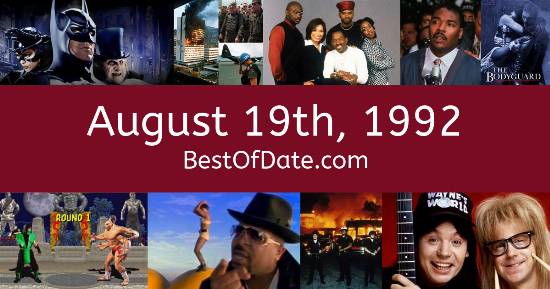 Songs that were on top of the music singles charts in the USA and the United Kingdom on August 19th, 1992.

The date is August 19th, 1992 and it's a Wednesday. Anyone born today will have the star sign Leo. It's summer, so the temperatures are warmer and the evenings are longer than usual.

In America, the song End Of The Road by Boyz II Men is on top of the singles charts. Over in the UK, Rhythm Is A Dancer by Snap is the number one hit song. George W. Bush Snr. is currently the President of the United States and the movie Death Becomes Her is at the top of the Box Office.

In fashion, many of the trends from the late 80s are still in vogue. Colored tights, denim overalls, leotards, flannel shirts and shoulder pads are all fashionable at the moment. Grunge fashion has also become mainstream, popularizing band t-shirts, ripped jeans, mom jeans and Doc Martens. In Europe, a war is continuing to rage on in Bosnia and Herzegovina. English boy band "Take That" have released their first studio album "Take That & Party".

Kids and teenagers are watching TV shows such as "Adventures of the Little Koala", "The Fresh Prince of Bel-Air", "Beverly Hills, 90210" and "Clarissa Explains It All". If you're a kid or a teenager, then you're probably playing with toys such as Jenga, G.I. Joe (figures), Super Soaker (water gun) and Nerf Blaster.

A Spotify playlist of songs from the year 1992. Take a trip back to the days of Whitney Houston, the Red Hot Chili Peppers, Boyz II Men and SNAP!

Celebrities, historical figures and notable people who were born on the 19th of August.

George W. Bush Snr. was the President of the United States on August 19th, 1992.

John Major was the Prime Minister of the United Kingdom on August 19th, 1992.

Enter your date of birth below to find out how old you were on August 19th, 1992.

Leave a comment and tell everyone why August 19th, 1992 is important to you.