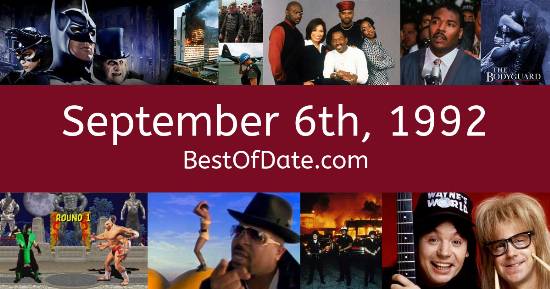 Songs that were on top of the music singles charts in the USA and the United Kingdom on September 6th, 1992.

The movie "Honeymoon in Vegas" was at the top of the box office on September 6th, 1992.

The date is September 6th, 1992 and it's a Sunday. Anyone born today will have the star sign Virgo. Currently, people are enjoying their weekend.

Schools have started back and autumn has arrived, so temperatures have started to cool and trees are beginning to shed their leaves. In America, the song End Of The Road by Boyz II Men is on top of the singles charts. Over in the UK, Rhythm Is A Dancer by Snap is the number one hit song.

George W. Bush Snr. is currently the President of the United States and the movie Honeymoon in Vegas is at the top of the Box Office. In the United Kingdom, John Major is the current Prime Minister. A civil war is currently taking place in the African country of Rwanda.

On TV, people are watching popular shows such as "Only Fools and Horses", "Star Trek: The Next Generation", "Quantum Leap" and "Seinfeld". Meanwhile, gamers are playing titles such as "Duck Hunt", "Civilization", "Street Fighter II: The World Warrior" and "Super Mario Kart". Kids and teenagers are watching TV shows such as "Married... with Children", "Beverly Hills, 90210", "Doug" and "Taz-Mania".

Popular toys at the moment include the likes of Jenga, Yo-yo, the Super Nintendo Entertainment System (SNES) and Super Soaker (water gun).

George W. Bush Snr. was the President of the United States on September 6th, 1992.

John Major was the Prime Minister of the United Kingdom on September 6th, 1992.

Enter your date of birth below to find out how old you were on September 6th, 1992.

Here are some fun statistics about September 6th, 1992.

Leave a comment and tell everyone why September 6th, 1992 is important to you.