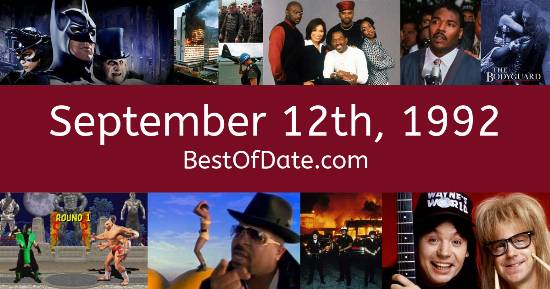 Songs that were on top of the music singles charts in the USA and the United Kingdom on September 12th, 1992:

The date is September 12th, 1992 and it's a Saturday. Anyone born today will have the star sign Virgo. Currently, people are enjoying their weekend.

Schools have started back and autumn has arrived, so temperatures have started to cool and trees are beginning to shed their leaves. In America, the song End Of The Road by Boyz II Men is on top of the singles charts. Over in the UK, Rhythm Is A Dancer by Snap is the number one hit song.

George W. Bush Snr. is currently the President of the United States and the movie Honeymoon in Vegas is at the top of the Box Office. In the United Kingdom, John Major is the current Prime Minister. A civil war is currently taking place in the African country of Rwanda.

In music, Van Halen's "Right Now" has won the "Video of the Year" award at the 1992 MTV VMAs. Tributes are currently pouring in for actor Anthony Perkins, who has passed away due to AIDS. Perkins was probably best known for portraying Norman Bates in the movie "Psycho" (1960). People are watching popular TV shows such as "Star Trek: The Next Generation", "Saved by the Bell", "Clarissa Explains It All" and "Martin".

Meanwhile, gamers are playing titles such as "Duck Hunt", "F-16 Combat Pilot", "Civilization" and "Desert Strike ". Children and teenagers are currently watching television shows such as "Fireman Sam", "The Simpsons", "Blossom" and "Are You Afraid of the Dark?". If you're a kid or a teenager, then you're probably playing with toys such as "Easy-Bake Oven", "Sylvanian Families", "Polly Pocket" and "Nerf Blaster".

Celebrities and historical figures that were born on the 12th of September:

Who was the Prime Minister of the United Kingdom on September 12th, 1992?

Enter your date of birth below to find out how old you were on September 12th, 1992.

Looking for some nostalgia? Here are some Youtube videos relating to September 12th, 1992. Please note that videos are automatically selected by Youtube and that results may vary! Click on the "Load Next Video" button to view the next video in the search playlist. In many cases, you'll find episodes of old TV shows, documentaries, music videos and soap dramas.

Here are some fun statistics about September 12th, 1992.