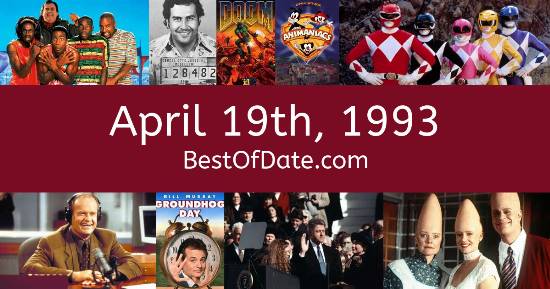 Songs that were on top of the music singles charts in the USA and the United Kingdom on April 19th, 1993.

The date is April 19th, 1993 and it's a Monday. Anyone born today will have the star sign Aries. The summer of 1993 is drawing closer and temperatures have started to rise.

It's 1993, so radio stations are being dominated by the likes of Meat Loaf, UB40, Snow, Haddaway, Whitney Houston, Take That, Janet Jackson and Mariah Carey. In celebrity news, "The Cosby Show" actress Lisa Bonet has officially filed for divorce from musician Lenny Kravitz. The couple had been separated since 1991. A siege between law enforcement and cult members at a compound near Waco, Texas, has ended with the loss of 76 lives. The siege had lasted for over 50 days. Live news footage of the scene showed that one of the buildings caught on fire during an assault by the FBI.

On TV, people are watching popular shows such as "Knots Landing", "Roseanne", "One Foot in the Grave" and "Star Trek: Deep Space Nine". Meanwhile, gamers are playing titles such as "Desert Strike ", "Street Fighter II: The World Warrior", "Wolfenstein 3D" and "Super Mario Kart". Children and teenagers are currently watching television shows such as "Saved by the Bell", "The Fresh Prince of Bel-Air", "Clarissa Explains It All" and "Barney & Friends".

If you're a kid or a teenager, then you're probably playing with toys such as Transformers, Super Soaker (water gun), Mighty Max and the Talkboy.

If you are looking for some childhood nostalgia, then check out April 19th, 1999 instead.

Internet personality.
Born on April 19th, 2002
She was born exactly 9 years after this date.

Bill Clinton was the President of the United States on April 19th, 1993.

John Major was the Prime Minister of the United Kingdom on April 19th, 1993.

Enter your date of birth below to find out how old you were on April 19th, 1993.