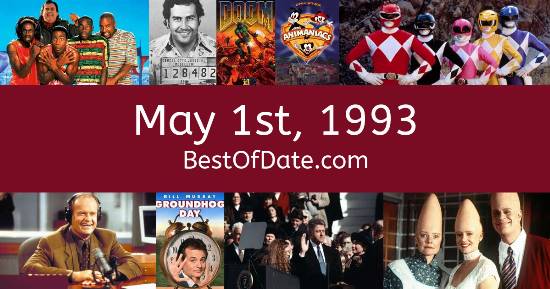 Songs that were on top of the music singles charts in the USA and the United Kingdom on May 1st, 1993.

The movie "Indecent Proposal" was at the top of the box office on May 1st, 1993.

The date is May 1st, 1993 and it's a Saturday. Anyone born today will have the star sign Taurus. Currently, people are enjoying their weekend.

The summer of 1993 has finally arrived. The weather has warmed up and the evenings are brighter than usual. In America, the song Informer by Snow is on top of the singles charts. Over in the UK, Young At Heart by Bluebells is the number one hit song.

Bill Clinton is currently the President of the United States and the movie Indecent Proposal is at the top of the Box Office. In the United Kingdom, John Major is the current Prime Minister. A civil war is currently taking place in the African country of Rwanda.

A playing discs game called "Pogs" is currently spreading in popularity throughout the world. It's 1993, so radio stations are being dominated by the likes of Meat Loaf, UB40, Snow, Haddaway, Whitney Houston, Take That, Janet Jackson and Mariah Carey. In soccer, French side Marseille have won the 1993 UEFA Champions League after defeating Italian side A.C. Milan 1-0. A 43rd minute goal from defender Basile Boli was enough to decide the game. Meanwhile, tragedy has also struck the sport, as most of the Zambian national football team have been tragically killed in a plane crash near Gabon.

In television news, a cartoon version of singer Barry White has appeared on the latest episode of The Simpsons. In tennis, there is shock at the news that Monica Seles has been stabbed in the shoulder during a match in Hamburg, Germany. The attack is believed to have been carried out by a mentally unstable fan who is obsessed with Steffi Graf. In Sri Lanka, president Ranasinghe Premadasa has been assassinated by a suicide bomber in the city of Colombo.

On TV, people are watching popular shows such as "Last of the Summer Wine", "Seinfeld", "Beverly Hills, 90210" and "Dinosaurs". Meanwhile, gamers are playing titles such as "Duck Hunt", "Desert Strike ", "Night Trap" and "Sonic the Hedgehog 2". Kids and teenagers are watching TV shows such as "Pingu", "Teenage Mutant Ninja Turtles", "Garfield and Friends" and "Rosie and Jim".

Popular toys at the moment include the likes of Nerf Blaster, Teen Talk Barbie, Littlest Pet Shop and Action Man.

Notable events that occurred around May 1st, 1993.

If you are looking for some childhood nostalgia, then check out May 1st, 1999 instead.

Rugby player.
Born on May 1st, 1999
He was born exactly 6 years after this date.

Social media personality.
Born on May 1st, 2004
She was born exactly 11 years after this date.

Historical weather information for May 1st, 1993.

Bill Clinton was the President of the United States on May 1st, 1993.

John Major was the Prime Minister of the United Kingdom on May 1st, 1993.

Enter your date of birth below to find out how old you were on May 1st, 1993.