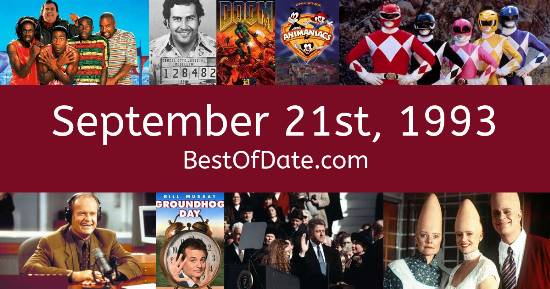 Songs that were on top of the music singles charts in the USA and the United Kingdom on September 21st, 1993.

The movie "Striking Distance" was at the top of the box office on September 21st, 1993.

The date is September 21st, 1993 and it's a Tuesday. Anyone born today will have the star sign Virgo. Schools and colleges are starting again and Autumn has officially arrived. As a result, temperatures are beginning to cool and trees are starting to shed their leaves.

The earthy smells of fall have started to fill the air. In America, the song Dream Lover by Mariah Carey is on top of the singles charts. Over in the UK, Mr. Vain by Culture Beat is the number one hit song.

Bill Clinton is currently the President of the United States and the movie Striking Distance is at the top of the Box Office. In the United Kingdom, John Major is the current Prime Minister. Texting is not a thing yet. Instead, people are using landline phones and pagers. Furthermore, the vast majority of people still have no idea what "the Internet" is.

Grunge band "Nirvana" have released their new album "In Utero". This is their third studio album and it contains songs such as "Heart-Shaped Box" and "All Apologies". A new animated series called "Animaniacs" has made its TV debut on Fox Kids. The show consists of multiple characters and mini episodes. A controversial fighting game called "Mortal Kombat" has just been released on the SNES and the SEGA Genesis. The game has received criticism because of its blood and gore.

American singer Meat Loaf has released his new single "I'd Do Anything For Love (But I Won't Do That)". On NBC, the network has started airing a new sitcom called Frasier. The show, which is a spin-off of Cheers, follows the life of psychiatrist Frasier Crane as he returns to live in Seattle. In Europe, the last Russian troops have just been withdrawn from Poland.

In Russia, President Boris Yeltsin has officially declared that he has dissolved the Supreme Soviet. However, his declaration contradicts the Russian constitution, which states that the President of the Russian Federation cannot carry out such an action. If you were to travel back to this day, notable figures such as Vincent Price, River Phoenix, Frank Zappa and Bill Hicks would all be still alive. On TV, people are watching popular shows such as "In the Heat of the Night", "Home Improvement", "Melrose Place" and "Lois & Clark: The New Adventures of Superman".

Meanwhile, gamers are playing titles such as "Desert Strike ", "Ecco the Dolphin", "Sonic the Hedgehog 2" and "Shinobi III: Return of the Ninja Master". Children and teenagers are currently watching television shows such as "Full House", "Mr. Bean", "Doug" and "Animaniacs". If you're a kid or a teenager, then you're probably playing with toys such as the Ghostbusters Proton Pack, the Sega Genesis / Mega Drive, Yo-yo and Littlest Pet Shop.

If you are looking for some childhood nostalgia, then check out September 21st, 1999 instead.

Bill Clinton was the President of the United States on September 21st, 1993.

John Major was the Prime Minister of the United Kingdom on September 21st, 1993.

Enter your date of birth below to find out how old you were on September 21st, 1993.

Here are some fun statistics about September 21st, 1993.