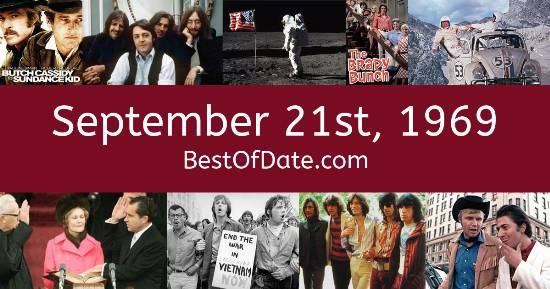 These songs were on top of the music charts in the United States and the United Kingdom on September 21st, 1969.

The top "Box Office" movie on this date was the film "True Grit".

The date is September 21st, 1969, and it's a Sunday. Anyone born today will have the star sign Virgo. Currently, people are enjoying their weekend.

Schools and colleges are starting again and Autumn has officially arrived. As a result, temperatures are beginning to cool and trees are starting to shed their leaves. The earthy smells of fall have started to fill the air. In America, the song Sugar Sugar by The Archies is on top of the singles charts.

Over in the UK, Bad Moon Rising by Creedence Clearwater Revival is the number one hit song. Richard Nixon is currently the President of the United States, and the movie True Grit is at the top of the Box Office. In the United Kingdom, Harold Wilson is the current Prime Minister.

On TV, people are watching popular shows such as "Dark Shadows", "Hawaii Five-O", "Hee Haw" and "Room 222". Children and teenagers are currently watching television shows such as "Top Cat", "Spider-Man", "Skyhawks" and "Scooby-Doo, Where Are You!". Popular toys at the moment include the likes of Tonka trucks, Motorific (slot car toys), Suzy Homemaker and Crissy (doll).

These are trending news stories and fads that were prevalent at this time. These are topics that would have been in the media on September 21st, 1969.

News stories and other events that happened around September 21st, 1969.

Check out our personality summary for people who were born on September 21st, 1969.

If you are looking for some childhood nostalgia, then you should check out September 21st, 1975 instead.

Singer.
Born on September 21st, 1972
He was born exactly 3 years after this date.

TV personality.
Born on September 21st, 1981
She was born exactly 12 years after this date.

Richard Nixon was the President of the United States on September 21st, 1969.

Harold Wilson was the Prime Minister of the United Kingdom on September 21st, 1969.

Find out what your age was on September 21st, 1969, by entering your DOB below.
This information is not saved on our server.

Here are some fun statistics about September 21st, 1969.