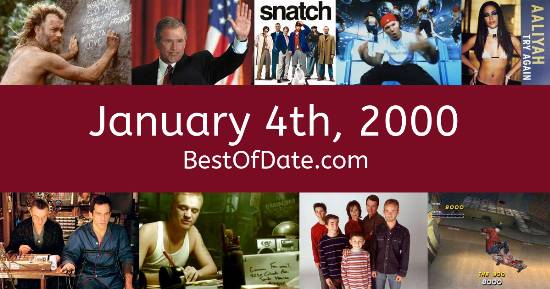 Songs that were on top of the music singles charts in the USA and the United Kingdom on January 4th, 2000.

The movie "Stuart Little" was at the top of the box office on January 4th, 2000.

The date is January 4th, 2000 and it's a Tuesday. Anyone born today will have the star sign Capricorn. People are starting to return back to work and school after the Christmas holidays.

In celebrity news, Catherine Zeta-Jones and actor Michael Douglas have recently become engaged. In technology news, more and more music companies are beginning to release MP3 players. The new MP3 format means that music listeners are able to listen to multiple albums on the go. It's the year 2000, so the music charts are being dominated by the likes of Christina Aguilera, Faith Hill, Savage Garden, Destiny's Child, Santana, Sisqó, Creed, Aaliyah and Enrique Iglesias.

On TV, people are watching popular shows such as "Last of the Summer Wine", "Walker, Texas Ranger", "The Wild Thornberrys" and "Grizzly Tales for Gruesome Kids". Meanwhile, gamers are playing titles such as "Pokémon Red and Blue", "Counter-Strike", "Tony Hawk's Pro Skater" and "Resident Evil 3: Nemesis". Children and teenagers are currently watching television shows such as "Friends", "Arthur", "Pokemon" and "CatDog".

If you are looking for some childhood nostalgia, then check out January 4th, 2006 instead.

Bill Clinton was the President of the United States on January 4th, 2000.

Tony Blair was the Prime Minister of the United Kingdom on January 4th, 2000.

Enter your date of birth below to find out how old you were on January 4th, 2000.

Here are some fun statistics about January 4th, 2000.