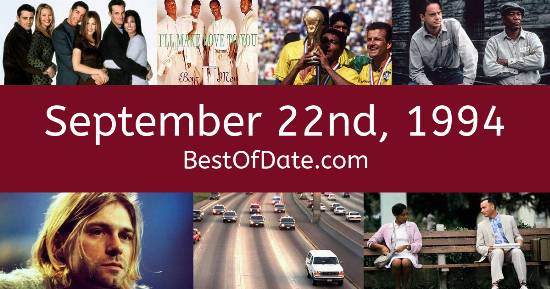 These songs were on top of the music charts in the United States and the United Kingdom on September 22nd, 1994.

The top "Box Office" movie on this date was the film "Forrest Gump".

The date is September 22nd, 1994, and it's a Thursday. Anyone born today will have the star sign Virgo. Schools and colleges are starting again and Autumn has officially arrived. As a result, temperatures are beginning to cool and trees are starting to shed their leaves.

Bill Clinton is currently the President of the United States, and the movie Forrest Gump is at the top of the Box Office. In the United Kingdom, John Major is the current Prime Minister. Meanwhile, in technology news, a relatively new storage format called the CD is beginning to outpace the regular cassette tape in music sales. The disc-based format gives listeners the ability to skip between songs instead of having to manually rewind and forward.

It's 1994, so radio stations are being dominated by the likes of All-4-One, Boyz II Men, R. Kelly, Céline Dion, Bruce Springsteen, Bryan Adams, Meat Loaf, Bon Jovi, Wet Wet Wet, Rednex and Mariah Carey. In Europe, a war is continuing to rage on in Bosnia and Herzegovina. On television, a new animated children's show called "The Magic School Bus" has recently been aired for the first time.

In celebrity news, Hollywood actor Johnny Depp has just been arrested in New York City after causing over $9,000 worth of damage to his hotel room. In the United Kingdom, the government has lifted a broadcasting ban on Irish Republican party Sinn Fein. The ban had been in place since October, 1988. Meanwhile, a new medical drama called "ER" has just been aired on NBC for the first time. The show, which stars George Clooney, follows the trials and tribulations of a fictional emergency room in Chicago.

In Haiti, 20,000 US troops have peacefully entered the country in order to restore democratically elected Jean-Bertrand Aristide to power. A new fantasy drama TV series called "Touched by an Angel" has made its debut on CBS. In soccer, 19-year-old Paul Scholes has just made his debut for English side Manchester United.

On NBC, a new sitcom called "Friends" has recently made its debut. The show follows the lives of six friends who live in New York City. If you were to travel back to this day, notable figures such as Raul Julia, Eazy E, Selena and Bob Ross would all be still alive. On TV, people are watching popular shows such as "One Foot in the Grave", "Home Improvement", "Lois & Clark: The New Adventures of Superman" and "Babylon 5".

Meanwhile, gamers are playing titles such as "NBA Jam", "Tetris 2", "Jungle Strike" and "Star Wars: TIE Fighter". Kids and teenagers are watching TV shows such as "The Ren & Stimpy Show", "Doug", "Home Improvement" and "Batman: The Animated Series". If you're a kid or a teenager, then you're probably playing with toys such as Pogo ball / Lolo ball, the Super Nintendo Entertainment System (SNES), Littlest Pet Shop and Mighty Max.

These are trending news stories and fads that were prevalent at this time. These are topics that would have been in the media on September 22nd, 1994.

Check out our personality summary for people who were born on September 22nd, 1994.

If you are looking for some childhood nostalgia, then you should check out September 22nd, 2000 instead.

Bill Clinton was the President of the United States on September 22nd, 1994.

John Major was the Prime Minister of the United Kingdom on September 22nd, 1994.

Enter your date of birth below to find out how old you were on September 22nd, 1994.
This information is not transmitted to our server.

Here are some fun statistics about September 22nd, 1994.