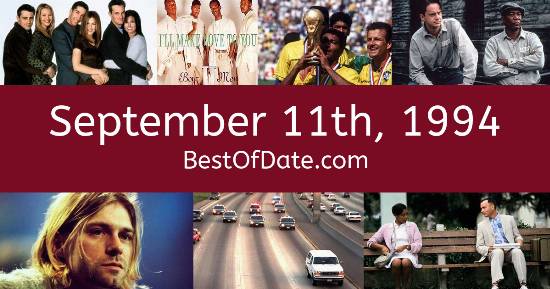 Songs that were on top of the music singles charts in the USA and the United Kingdom on September 11th, 1994.

The date is September 11th, 1994 and it's a Sunday. Anyone born today will have the star sign Virgo. Currently, people are enjoying their weekend.

Schools and colleges are starting again and Autumn has officially arrived. As a result, temperatures are beginning to cool and trees are starting to shed their leaves. In America, the song I'll Make Love To You by Boyz II Men is on top of the singles charts. Over in the UK, Love Is All Around by Wet Wet Wet is the number one hit song.

It's 1994, so radio stations are being dominated by the likes of All-4-One, Boyz II Men, R. Kelly, Céline Dion, Bruce Springsteen, Bryan Adams, Meat Loaf, Bon Jovi, Wet Wet Wet, Rednex and Mariah Carey. In Europe, a war is continuing to rage on in Bosnia and Herzegovina. A new catchy song called "Saturday Night" has been released by Danish eurodance artist Whigfield. The song is currently receiving constant airplay on radio stations.

In music news, Aerosmith's "Cryin" has recently won Video of the Year at the 1994 MTV Video Music Awards. In the United States, 132 people have tragically lost their lives after USAir Flight 427 crashed during its approach towards a runway in Pittsburgh. On television, a new animated children's show called "The Magic School Bus" has recently been aired for the first time.

Tributes are currently pouring in for English-American actress Jessica Tandy, who has passed away at the age of 85. Recently, Tandy had starred in movies such as Driving Miss Daisy (1989) and Fried Green Tomatoes (1991). If you were to travel back to this day, notable figures such as Raul Julia, Eazy E, Selena and Bob Ross would all be still alive. On TV, people are watching popular shows such as "Last of the Summer Wine", "Murder, She Wrote", "Family Matters" and "Frasier".

Meanwhile, gamers are playing titles such as "Mortal Kombat", "X-Men", "NBA Jam" and "Star Wars: TIE Fighter". Kids and teenagers are watching TV shows such as "Thomas the Tank Engine", "Married... with Children", "Full House" and "Batman: The Animated Series". If you're a kid or a teenager, then you're probably playing with toys such as the Super Nintendo Entertainment System (SNES), Pogs / Milkcaps, Littlest Pet Shop and Power Rangers figures.

If you are looking for some childhood nostalgia, then check out September 11th, 2000 instead.

Bill Clinton was the President of the United States on September 11th, 1994.

John Major was the Prime Minister of the United Kingdom on September 11th, 1994.

Enter your date of birth below to find out how old you were on September 11th, 1994.

Here are some fun statistics about September 11th, 1994.